The police department, in a series of tweets, confirmed that shots have been fired in the Inner City district. It has appealed locals to remain away from the central Vienna region where the site of attack is located. Social media users were directed to refrain from sharing photos and videos. 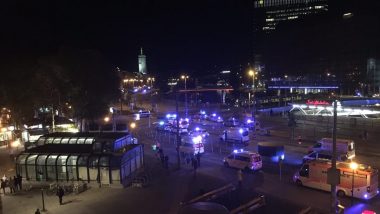 Visuals from the locality where the attack was reported in Vienna | (Photo Credits: Twitter/@@eevriviades)

Vienna, November 2: A major shooting incident was reported in the Austria capital late on Monday evening. A group of gunmen went on a rampage in central part of the city, and carried out attacks at six locations including a street where a synagogue is located.  France: 3 Dead As Woman Beheaded In Knife Attack Near Notre Dame Basilica in Nice.

According to reports, at least 2 people have died and over 15 are left injured in the shooting incident. One suspect has also been shot dead. Austrian public broadcaster ORF reported that the attack erupted at around 8 pm (local time). Several rounds of shots were fired near the synagogue, it said.

The Vienna police had cordoned off the central district, and a rigorous manhunt was underway till the time the latest reports had arrived. According to local media outlets, the attackers had briefly taken hostages at Akakiko restaurant in central Vienna.

The local media reports, however, could not confirm whether the synagogue was the target of the attack. Daily Mirror has reported the death of at least seven persons who was shot near the Jewish place of worship.

Nehammer told ORF that the terror intent was apparent behind the fatal attack. "At the moment I can confirm we believe this is an apparent terror attack,” he said.

The police department, in a series of tweets, confirmed that gunshots had been fired in the Inner City district. It appealed locals to remain away from the central Vienna region where the site of attack is located. Social media users were directed to refrain from sharing photos and videos.

"Shots fired in the Inner City district. There are persons injured. Keep away from all public places or public Transport - don't share any videos or photos," said one of the tweets posted by the police department.

(The above story first appeared on LatestLY on Nov 03, 2020 07:30 AM IST. For more news and updates on politics, world, sports, entertainment and lifestyle, log on to our website latestly.com).