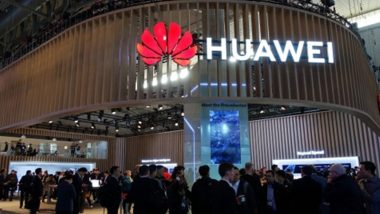 New Delhi, June 30: The leading provider of Information and Communication Technology & Smart Devices, Huawei was named as the 6th most innovative companies of 2020 by Boston Consulting Group (BCG).

They recently released ranking for 50 Most Innovative Companies in 2020, this is the highest ever ranking achieved by tech giant, with Huawei shooting up 42 spots since 2019 ranking, the most by anyone in the Top 50 list. Also Read | Yuzvendra Chahal's Training Video With Rishabh Pant Will Make You Go Rofl! (View Post).

The ranking is based on the assessment of 2,500 global innovation executives (63 per cent C level, 37 per cent senior vice-president or vice-president level) since 2005. The performances of the companies were evaluated on the basis of four parameters, including: Global "Mindshare", Industry Disruption, Industry Peer View and Value Creation.

"Huawei has been investing heavily in innovation since decades now. Although we anticipated that we will improve our ranking in the Top 50 of the prestigious BCG list, we are absolutely elated to have claimed the 6th spot in the global ranking. As a business group rooted in R&D, we are constantly innovating to deliver superlative connectivity and technologies to our consumers spread across the world. The achievement is an acknowledgement of how the company has grown in the past one year," said Huawei Spokesperson. Also Read | Genoa vs Juventus, Serie A 2019-20: Cristiano Ronaldo, Paulo Dybala and Other Players to Watch Out in GEN vs JUV Football Match.

This year BCG also added a new scoring dimension to evaluate each company's variety and intensity of boundary breaking by assessing its ability to breach established industry entry barriers and play in an array of markets outside its own.

Huawei has continued to invest over 10 per cent of its annual revenue back into R&D. In 2019, the company's R&D expenditure totalled CNY 131,659 million, accounting for 15.3 per cent of its total revenue. It has also invested 4 Billion USD in the past decade, marking the way for itself as a global leader in the next-generation technology.

Further intensifying and promoting new innovations in 5G applications, the company has established 5G joint innovation centres together with carriers worldwide. Huawei is shifting itself from an Innovation 1.0 Model to Innovation 2.0, driven by new technologies and broadened vision for future.

The aggressive technological advancements made by Huawei in the past decade has enabled the comparatively younger company to stand in the same league as Apple, Alphabet, Amazon, Microsoft, Samsung who occupy the top five spots, and beating Facebook, Alibaba, IBM and Sony. Huawei will continue to consolidate its capabilities and reach in future technologies and innovations.