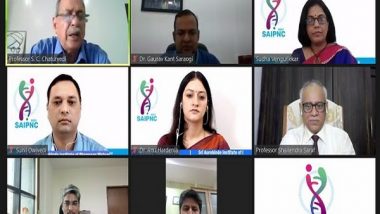 Despite many differences in body types and genetic disposition, everyone is likely to receive the same medical care for a given disease following a standard medical protocol during the sickness. Modern medicine has been using the "one-size-fits-all" approach to medication that has supported broad population averages but there has been a constant attempt to customise healthcare with medical decisions, treatments and practices based on the patient's genetics and body type.

This approach called "Precision and Personalized Medicine" was the topic of this two day AICTE Sponsored Online National Conference on the theme of "Precision Medicine: Current Scenario and Future Aspects" held on 24th-25th September, 2021 by Sri Aurobindo Institute of Pharmacy (SAIP).

Chief Guest Professor Shailendra Saraf Vice President, Pharmacy Council of India, New Delhi enlightened the guests and delegates about the importance of Precision Medicine with the example of Charak Samhita which quoted, "Every individual is different from another and hence should be considered as a different entity" and also mentioned how concept of Precision Medicine (Genetic Based Pharmaceutical formulations) was already found in Ayurveda and Natural Medicine for 500 years in India and the same concept now lays foundation for Modern Pharmaceutical Research of the future."

Prof. Saraf (Vice President, PCI) also urged the delegates and speakers to produce a Conference White Paper on Precision Medicine which can be submitted to Pharmacy Council of India so that the subject can be included in the regular curriculum of pharmacy students.

More than 450 participants from different states of the country participated in the conference and more than 150 participants in their poster presentations apprised all the delegates about the progress in precision medicine through research outcomes.