Rockstar has completed 10 years. On such a special occasions, the team of the film including music maestro AR Rahman, Ranbir, Imtiaz, and actor Sanjana Sanghi conducted a virtual meet 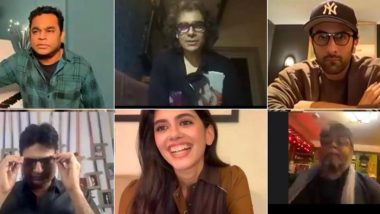 It's been 10 years since Imtiaz Ali's Rockstar, starring Ranbir Kapoor in the lead role, was released. Yes! You read it right. The film has completed 10 years. On such a special occasions, the team of the film including music maestro AR Rahman, Ranbir, Imtiaz, and actor Sanjana Sanghi conducted a virtual meet, wherein they all took a stroll down memory lane and recalled their experiences working with each other. Dhadkan: Zindaggi Kii - Additi Gupta to Play a Doctor in Sony TV Show.

Thanks to Sanjana for sharing a glimpse of their meet with all of us. Taking to her Instagram account, Sanjana shared a screenshot from the video call in which we can see Ranbir in his casual avatar wearing a cap and full sleeves T-shirt.  "And just like that, today marks 10 glorious years to our beloved Rockstar becoming yours forever.10 years to that one single surreal moment that single handedly changed my life and the way I look at life forever. Magic, is the only word to describe how each moment, each bond, each scene performed on this mystical journey has ever felt. Lee Min-ho Aka Kim Tan Revisits His Meet-Cute Site With Park Shin-hye From The Heirs (View Pics).

And gratitude, the only emotion that overflows," she captioned the post.

Sanjana, who was seen as Nargis Fakhri's younger sister in the film, also shared the one thing that hasn't changed over the course of ten years and that is "Ranbir and Imtiaz still pull her leg like they used to on set." "Thank you @arrahman Sir for bringing us together so impromptu, you're the best. Excerpts from our walk down memory lane, stories you may or may not know are coming to you soon. (Ranbir & @imtiazaliofficial pulling my leg just as was done with Little Sanj at 14 years of age of course continues)," she added.

Apart from the storyline, the film also became a rage for its music album including songs like 'Phir Se Udd Chala', 'Katiya' and 'Kun Faaya Kun', composed by AR Rahman.