Bollywood actors Akshay Kumar and Bhumi Pednekar starrer 'Raksha Bandhan' has been announced to release on the Independence day weekend, next year. 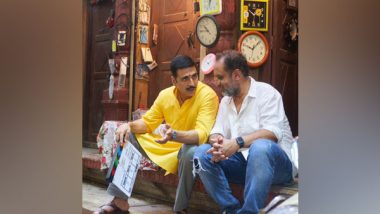 Also Read | Kumkum Bhagya Actress Reyhna Pandit Talks About How She Learnt To Face Her Fears in Life!.

This news comes following the announcement by the Maharashtra Chief Minister Uddhav Thackeray that the cinema halls, which were closed down during the second wave of the ongoing novel COVID-19 pandemic, will be opening from October 22 in the state.

'Raksha Bandhan', helmed by Aanand L Rai, is a heart-tugging story of the indelible bond between a brother (Akshay Kumar) and his sisters, essayed by Sahejmeen Kaur, Deepika Khanna, Sadia Khateeb and Smrithi Srikanth. The film went on floors on June 21.

Also Read | Shershaah: Sidharth Malhotra Shares Thoughts on Being Honoured at the Himalayan Film Festival for His Movie on Captain Vikram Batra.

The film has been written by Aanand's longtime collaborator and National Award-winning screenwriter Himanshu Sharma, known for movies like 'Zero', 'Raanjhanaa' and the 'Tanu Weds Manu' franchise.