Arjun Kapoor dropped throwback pictures with his girlfriend Malaika Arora from Paris vacation. The Ek Villain Returns actor took to his Instagram handle and shared a couple of pictures. 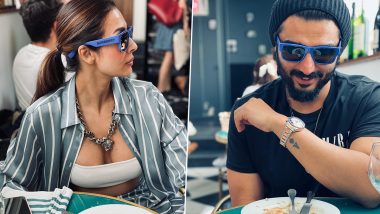 Actor Arjun Kapoor, on Tuesday, dropped throwback pictures with his girlfriend Malaika Arora from Paris vacation. The Ek Villain Returns actor took to his Instagram handle and shared a couple of pictures where Arjun and Malaika can be seen candidly posing for the camera while enjoying their breakfast. Malaika Arora Is Reminiscing Her Time With Arjun Kapoor in Paris and It’s Too Adorable To Be Missed! (Watch Video).

Arjun donned a black t-shirt and cool sunnies while Malaika wore a white bralette top with a striped shirt and a chain with same cool sunnies which Arjun wore. Sharing the clicks with fans, he wrote, "Who wore em better ??? Swipe right to know my answer !!! #throwbackmemories #paris." Fans bombarded the comment section with heart and fire emojis.

Meanwhile, on the work front, Arjun will be next seen in the dark comedy film Kuttey alongside Radhika Madan, Tabu and Konkana Sen Sharma. Helmed by Aasmaan Bhardwaj, the film is slated to release on November 4, 2022. Kuttey will be facing a big Bollywood clash with Katrina Kaif, Siddhant Chaturvedi and Ishaan Khatter starrer horror comedy film Phone Bhoot. Apart from that, he also has an action thriller film The Lady Killer along with actor Bhumi Pednekar in his kitty.