Get latest articles and stories on Entertainment at LatestLY. After a long hiatus, superstar Shah Rukh Khan and Gauri Khan's son Aryan Khan is back on Instagram. 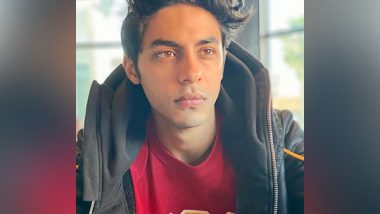 Mumbai (Maharashtra) [India], May 14 (ANI): After a long hiatus, superstar Shah Rukh Khan and Gauri Khan's son Aryan Khan is back on Instagram.

On Sunday, he took to the photo-sharing application to wish his sister Suhana Khan luck for her acting debut with Zoya Akhtar's directorial 'The Archies'.

Also Read | The Bachelor, American Idol, Shark Tank and Other Shows Get Renewed for New Seasons at ABC.

Sharing a teaser video of the film, Aryan wrote,"Best of luck baby sister! Go kick some a**."

He also added, "Teaser looks awesome everyone looks great. All of you will kill it."

For those unaware, Aryan was arrested on October 2 last year following the Narcotics Control Bureau (NCB) raids in Mumbai. He was granted bail 25 days after his arrest by the Bombay High Court. (ANI)