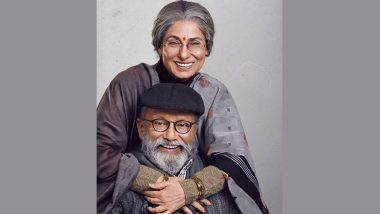 Love knows no age! Veteran stars Dimple Kapadia and Pankaj Kapur are all set to play lovers in a new romantic comedy film titled Jab Khuli Kitaab. The movie will be presented by Applause Entertainment in association with Shoe Strap Films. Also, Saurabh Shukla has come on board to helm 'Jab Khuli Kitaab', which is based on his play of the same name. Disney Signs New Distribution Deal With Google’s YouTube TV.

Talking about the film, Shukla said, "Jab Khuli Kitaab' is very close to my heart and I'm thrilled to have stalwarts like Pankaj Kapur and Dimple Kapadia as my leads. We all say that one should be transparent and clean in any relationship but how many of us are open to face the truth in our own relationships?" "The film is a rom-com with a couple in their 70s. You see them doing what any teenager will do in their relationships. The film is a joyride where you laugh, fall in love and cry with this unique couple. I'm thankful to Sameer Nair for supporting me and making this happen," he added. Don't Look Up: Leonardo DiCaprio Recalls Jumping into a Frozen Lake to Save His Dogs While Filming for Jennifer Lawrence's Netflix Film.

Set in the majestic alpine regions of Uttarakhand, the film has recently wrapped its start-to-finish schedule in Ranikhet. Aparshakti Khurana, Samir Soni, and Nauheed Cyrus are also a part of Jab Khuli Kitaab.