As Adele released Easy on Me, her first single in five years, Drake supported her by giving a sweet shoutout on social media to mark the occasion. 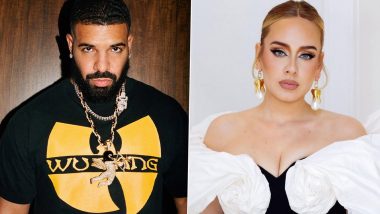 As Adele released 'Easy on Me', her first single in five years, Drake supported her by giving a sweet shoutout on social media to mark the occasion. Taking to his Instagram Story, Drake shared a gorgeous picture of the Grammy-winning singer and wrote, "One of my best friends in the world just dropped a single, @adele WOIIIIIIII." Tabbar Review: Pawan Malhotra and Supriya Pathak’s Tight Thriller Series Gets Further Elevated By Its Terrific Performances (LatestLY Exclusive).

According to People magazine, Drake and Adele are longtime pals and mutual fans. In her first-ever Instagram Live over the weekend, Adele even gave 'Certified Lover Boy' the praise of being her favourite album of the year. In that same Live, Adele teased fans with the opening bars of 'Easy on Me' the first single from her highly anticipated divorce album '30', which comes out on November 19. DC Fandome 2021: Know More About Streaming Date and Time of DC’s Biggest Fan Event of the Year.

In candid cover interviews for Vogue and Vogue UK released last week, Adele opened up about her split from Simon Konecki, explaining that neither of them did anything wrong, but she wasn't fulfilled in the marriage. "Neither of us hurt each other or anything like that. It was just: I want my son to see me really love, and be loved. It's really important to me. I've been on my journey to find my true happiness ever since," she told Vogue.

Adele shares 9-year-old Angelo with Konecki. Their divorce was finalised in March. She added to Vogue UK, "I wasn't miserable miserable, but I would have been miserable had I not put myself first ... But, yeah, nothing bad happened or anything like that." Adele announced '30' on Wednesday, calling the album in a statement her "ride or die throughout the most turbulent period" of her life.