DC has found its latest superhero! 'In the Heights' star Leslie Grace has been cast as Barbara Gordon in 'Batgirl', the upcoming HBO Max superhero film. 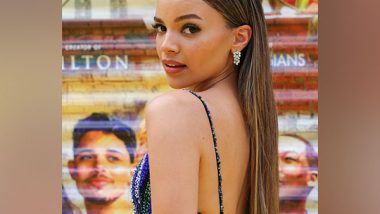 Washington [US], July 22 (ANI): DC has found its latest superhero! 'In the Heights' star Leslie Grace has been cast as Barbara Gordon in 'Batgirl', the upcoming HBO Max superhero film.

As per Variety, in securing the lead role, Grace beat out several formidable contenders, including 'Five Feet Apart' actor Haley Lu Richardson, 'Dora and the Lost City of Gold' star Isabela Merced and 'Set It Up' actor Zoey Deutch.

Adil El Arbi and Bilall Fallah, the filmmaking duo behind 'Bad Boys for Life', will be directing 'Batgirl'. Christina Hodson, widely known for 'Birds of Prey', 'Bumblebee' and 'The Flash', is writing the screenplay.

Filming of the upcoming project is expected to commence sometime in November.

Though the character of Batgirl was first introduced in the comic books back in 1961 under the name Betty Kane, the most famous version of Batgirl is Barbara, the daughter of police commissioner Jim Gordon.

The popular role has also been played by several other actors including Alicia Silverstone in the 1997 film 'Batman and Robin' and Yvonne Craig in the TV show that aired in the 1960s.

'In the Heights', adapted from Lin-Manuel Miranda's stage musical of the same name, was Grace's first film.

In the movie, which debuted in theatres and on HBO Max in June, Grace portrayed the whip-smart Nina Rosario alongside a cast that included Anthony Ramos, Melissa Barrera and Corey Hawkins.

Grace has made a name for herself as a singer and songwriter, releasing two studio albums and receiving three Latin Grammy nominations. Now, the actor is leading a comic book adaptation, Hollywood's holy grail.

'Batgirl' does not have a release date yet, but Warners has previously indicated it will likely bow on HBO Max in 2023. (ANI)