Johnny Depp's ex-agent Tracey Jacobs testified on Thursday that Depp's star power has declined over the years due to his erratic behaviour. She also revealed that at one point of time he asked his agency to give him USD 20 million. 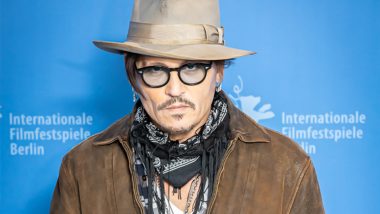 Johnny Depp's ex-agent Tracey Jacobs testified on Thursday that Depp's star power has declined over the years due to his erratic behaviour. She also revealed that at one point of time he asked his agency to give him USD 20 million because he needed money. Jacobs made a video-recorded appearance on the 19th day of Depp's defamation lawsuit against his ex-wife, Amber Heard, whom he alleges ruined her career with false accusations of domestic violence. Eva Green Supports Johnny Depp Amid Mudslinging Defamation Trial Against Ex-Wife Amber Heard, View Instagram Post.

Jacobs testified that in the past 10 years when portraying him, Depp was often late for filming. She said that he eventually gained a reputation that made it harder to find work. "Initially crews loved him. He was always so great with the crew. But crews don't love sitting around for hours and hours and hours waiting for the star to show up," she said. Jacobs said she sometimes got yelled at, and she tried to make her client realize he is damaging his own career. In addition, she also noted an increase in the use of alcohol and drugs. "His star had dimmed due to it getting harder to get him jobs. People were talking. The question was out there about his behaviour," Jacobs said. Amber Heard’s Agent Testifies About How the Actress Lost Jobs Because of Her Abuse Allegations Against Johnny Depp.

In his testimony, Jacobs said Depp went to United Talent Agency (UTA) and asked them to give him $20 million. He had a meeting with UTA CEO Jeremy Zimmer and President Jim Berkus, at which they refused to do so. "They said we're not in a position to give our clients that kind of money. We're not a bank," Jacobs testified. Heard's attorney also played a deposition from actor Ellen Barkin, who recounted having a brief affair with Depp in the 1990s. Barkin recalled an incident in which Depp threw a bottle of wine at him in a hotel room in Las Vegas. She said Depp was often angry and wants to take control.