Filmmaker Karan Johar turned 50 on Wednesday and several B-town celebs arrived for the birthday celebration at his residence in Mumbai. 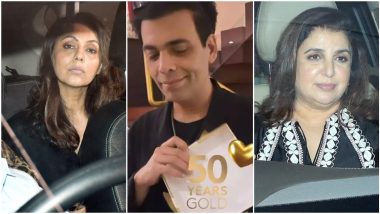 Filmmaker Karan Johar turned 50 on Wednesday and several B-town celebs arrived for the birthday celebration at his residence in Mumbai. For the celebration, Karan organised a grand birthday bash at his Bandra residence and invited all his close friends. Karan Johar Birthday Special: 5 Epic Replies by the Filmmaker to Trolls That Are Savage!

Celebrities like Farah Khan, Gauri Khan, Maheep Kapoor, Ayan Mukerji, Apoorva Mehta, Seema Kiran Sajdeh, Manish Malhotra, and a few others got spotted as they arrived for the bash. They were all dressed up in comfy yet stylish casuals for the night, posing and smiling as the paparazzi snapped them.

Meanwhile, the filmmaker will throw a grand birthday party at Yash Raj Studios for his friends in the industry. All of the prominent personalities in the Bollywood film industry, including the Dharma Talents, are invited to attend KJO's birthday bash. Karan Johar Birthday: Kareena Kapoor Khan Shares a Throwback Picture To Wish Her Sweetheart, Says 'No One Like You'.

On the work front, after five years, Karan Johar returns to directing with Rocky Aur Rani Ki Prem Kahani, starring Alia Bhatt and Ranveer Singh. On the other hand, films like Jug Jugg Jeeyo, Brahmastra, Mr Aur Mrs Mahi, Yoddha, and Selfie are among his many producing projects.