Karan Johar Birthday Special: 5 Epic Replies by the Filmmaker to Trolls That Are Savage!

As the multi-talented star, Karan Johar celebrates her birthday today (May 25), we bring to five times when the ace artist replied to hatred on the micro-blogging site with a lot of sass. Read on. 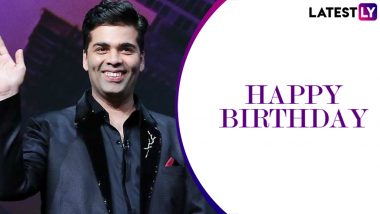 One man, many talents - is exactly how we would like to describe Karan Johar. The ace filmmaker who has a multi-faceted personality is definitely a gift to the film industry. From being a top-notch director, producer, actor, TV host and whatnot, there’s no stopping to this prolific artist. Having said that, another personality trait of KJo is that he’s super sassy. Well, there have been multiple times when he has been mercilessly trolled online. But instead of feeling low, he’s always been a winner with his savage replies. Koffee With Karan Season 7: Karan Johar Confirms That His Talk Show Will Return Exclusively On Disney+ Hotstar (View Post).

And as the filmmaker celebrates his birthday today (May 25), we are about to highlight five of his epic answers to trolls on social media which are packed with quite a punch, courtesy his wordplay. Right from giving it to back to someone online who called him 'gay' to shutting down a rather stupid query, he has done it all. So, let’s check it out. Karan Johar Birthday Special: DDLJ, Home Delivery, Fashion – 6 Noteworthy Cameos of the Filmmaker.

You must stop immediately or the world will come to a drastic end! https://t.co/wn62oCcrhA

KJo's Answer Over His Sexuality Query:

Listen Sherlock!!! First solve the mystery of your existence??? The prize will be to LAUNCH a missile up your arse!!! https://t.co/EY0NRGIZXv

Hello uninformed person! You cannot promote something that is already a big hit! https://t.co/ptC84yzdDj

When the Troll Desired 'Karan Johar: The Gay' Movie:

You absolutely orignal genius! Where have you been hiding all this while??? Thank you for existing and emerging as the most prolific voice on Twitter today!!! https://t.co/5lxcPMjVif

Ok this really made me laugh! 🤣

A troll with a sense of humour is so refreshing! Thanks Doc! https://t.co/nuelRifxzI

Indeed, there is no one like Karan Johar and we can repeat this a million of times. Bow down to the King of wit! Well, on his birthday, all we wish is that the landmark filmmaker’s popularity grow to unmatchable limits. HBD, KJo. Rise and shine!

(The above story first appeared on LatestLY on May 25, 2022 12:01 AM IST. For more news and updates on politics, world, sports, entertainment and lifestyle, log on to our website latestly.com).