Get latest articles and stories on Entertainment at LatestLY. As actor-director-producer Farhan Akhtar turned 48 on Sunday, his girlfriend and actor-singer Shibani Dandekar posted an adorable birthday message on social media. 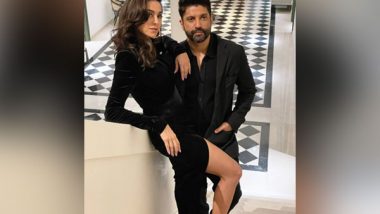 Taking to her Instagram handle, Shibani posted glamourous pictures of them together, dressed in black.

Also Read | OTT Releases Of The Week: Human on Disney+ Hotstar, Yeh Kaali Kaali Ankhein on Netflix, The Tragedy of Macbeth on Apple TV+ and More.

Further, she penned, "My Foo, to what will be your best year yet. Love you FOREVER. Happy birthday. @faroutakhtar. #happybirthday #love #goodvibesonly."

Fans and fellow members of the film fraternity gushed over the beautiful couple in the comments section.

Also Read | Fact Check: Did David Bowie Predict Rising Social Media Influence and Rise of Far-Right Governments Way Back in 1999? Here’s the Truth of the Video That Simi Garewal Shared on Twitter.

"These are such epic pictures," a social media user added.

Farhan and Shibani have been together for three years now.