Umang 2022: Shah Rukh Khan Wins Hearts With His Performance of ‘I Am the Best’ at Mumbai Police Annual Event

Shah Rukh Khan recently did his first ever live on Instagram. He won hearts as he performed his song, I Am The Best from his movie Phir Bhi Dil Hai Hindustani, for the Mumbai Police annual event Umang. Not only that, he also recently completed 30 years in the Bollywood industry. Congratulations to Shah Rukh Khan! 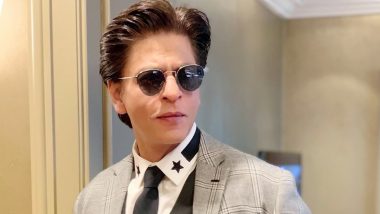 After surprising his fans with his first-ever Instagram live session, superstar Shah Rukh Khan, on Sunday, enthralled everyone with his special performance at Mumbai Police annual event Umang. Several videos and images from the star-studded gala have surfaced online in which SRK is seen grooving to his song "I am the best" from his film Phir Bhi Dil Hai Hindustani. He looked dapper in a black suit and shades. 30 Years Of Shah Rukh Khan: Superstar Completes Three Decades in Bollywood, Netizens React.

SRK's performance has made his fans extremely happy and nostalgic as he gave his first stage performance in many years. "He is the best...he is the best," a netizen wrote on Twitter. "@iamsrk..You are the best of the best #ShahRukhKhan dancing on the song I Am The Best at #Umang2022," another one tweeted.

"Can't take my eyes off him," a Twitterati wrote. Also, SRK made a grand entry on a bike. His entry reminded fans of his entry scene in his Bollywood debut Deewana. "This made me nostalgic. Feels like yesterday when he made his Bollywood debut," an Instagram user wrote.

"SRK is back and how," another one commented. On June 25 2022, SRK completed 30 years in the film industry. Marking the special occasion, he unveiled his first look from his upcoming film Pathaan.

In the poster, Shah Rukh was looking raw in a shirt and jeans with a gun in his hand. His face was partially visible and it was rugged and bloodied. He also expressed his gratitude for receiving everyone's infinite love and smiles throughout his journey. "30 yrs and not counting cos ur love and smiles have been infinite." Amitabh Bachchan and Shah Rukh Khan to Come Together for Don 3 - Reports.

"Here's to continuing with #Pathaan. Celebrate #Pathaan with #YRF50 on 25th January, 2023. Releasing in Hindi, Tamil and Telugu," he captioned the post. Helmed by Siddharth Anand, Pathaan also stars Deepika Padukone and John Abraham. Apart from Pathaan, SRK will also be seen in Dunki and Jawaan. Dunki is Rajkumar Hirani's directorial, while Jawaan is helmed by Atlee.