Vicky Kaushal and Katrina Kaif's marriage began on Tuesday as the pre-wedding festivities got underway at a luxury hotel here in Sawai Madhopur. 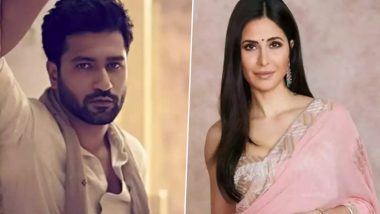 The countdown to Bollywood star Vicky Kaushal and Katrina Kaif's marriage began on Tuesday as the pre-wedding festivities got underway at a luxury hotel here in Sawai Madhopur. Kaif, 38, and Kaushal, 33, are tying the knot after dating for more than a year. The three-day wedding festivities of the Bollywood star couple began with a Mehendi ceremony with close family members as well as friends of the couple from the film industry reaching Rajasthan. Katrina Kaif-Vicky Kaushal Wedding: Radhika Madan, Malavika Mohanan and Other Celebrities Jet Off to Jaipur To Attend VicKat’s Grand Ceremony.

Both Kaif and Kaushal left for Jaipur from Mumbai on Monday evening with their families. Soon after their arrival in Jaipur, the two families drove straight to the wedding venue, Six Senses Fort Barwara, Sawai Madhopur, in a convoy of more than 15 cars. Close friends and colleagues of the couple, including Kaif's frequent collaborator filmmaker Kabir Khan, his actor wife Mini Mathur, director Vijay Krishna Achara of "Dhoom 3" and "Thugs of Hindostan" fame, actor couple Neha Dhupia and Angad Bedi arrived in Jaipur on Tuesday morning. Vicky Kaushal’s Family to Welcome Katrina Kaif With Mehendi Bash Ahead of Their Wedding Ceremony in Rajasthan.

Kaushal's younger brother Sunny Kaushal's friend Sharvari Wagh and his "Shiddat" co-star Radhika Madan have also arrived. The distance between Jaipur and the hotel is approximately 120 km. Noted playback singers like Shankar Mahadevan, Ehsaan Noorani, Punjabi singer Gurdas Maan, were also spotted arriving at Jaipur earlier today. There are reports that Mann will be performing at the wedding. When asked what he would like to say to Kaif and Kaushal, Maan told reporters outside Jaipur airport, "My love to the couple. God bless them."

For the Mehendi ceremony, nearly 20 kg of "organic mehendi" powder has been supplied from Sojat town of Rajasthan's Pali district. Apart from the mehendi powder, 400 pieces of mehendi cones have also been sent for the couple's wedding, scheduled to take place at hotel Six Senses Fort Barwara, Sawaimadhopur, Rajasthan. Sojat is famous for mehendi cultivation. "We have supplied organic mehendi to the event management company for the wedding functions. We have supplied the mehendi free of cost as a gift from Sojat, Pali," Nitesh Aggarwal, owner of the Sojat-based mehendi processing and manufacturing firm Natural Herbal, told PTI.

Aggarwal said it took them almost 20 days to process the organic mehendi especially for the wedding. According to sources, the couple will celebrate the mehendi ceremony with both sides of the family. "Vicky has a big, loving and warm Punjabi family on his side and his chacha, chachi (paternal uncle and aunt), mama and mami (maternal uncle and aunt) are all looking forward to officially welcoming Katrina into the family. "The wedding preparations have been in full swing on his side for quite some time now. It's going to be a joyous occasion for both sides with both their friends and family getting together to celebrate the couple's special day," the sources said.

They added that Kaif's family has also specially flown down from London -- her mother, her sisters and brother as well as a close group of friends. "While it's going to be a private, intimate affair, the celebrations are still going to be grand and they have spared no expense to ensure that they make their special day a memorable one," the sources said. The luxurious property, a Fort converted into a hotel, has been lit up in bright yellow lights for the wedding celebrations and is guarded by private security personnel and bouncers.

Elaborate security arrangements are in place in and around the hotel. While both the gates of the hotel are being guarded by private security personnel, local policemen are also seen deployed in the area. District collector Rajendra Kishan said that the district administration has given instructions to the hotel authorities to ensure compliance of COVID-19 safety guidelines. "It is a personal event. I recently held a meeting with our officers and representatives of the hotel and asked them to ensure compliance of COVID-19 related guidelines," he said.

The hotel authorities and security agency have also been instructed to coordinate with the local police so that there are no security related issues, he said. The big fat wedding of B-town has naturally sparked interest in media, with various stories being speculated about the three-day elaborative festivities, such as sufi theme for sangeet, no camera policy, guests required to sign an NDA or the couple selling their wedding photo rights for huge amounts.