Bollywood has always set a benchmark on how we should cherish our loved ones in reel life. And from Amitabh and Abhisekh Bachchan to Shah Rukh and Aryan Khan, the B-town is brimming with sons who have chosen to follow their father's footsteps and pursue acting as a career, leaving a hint that their real life is no different. 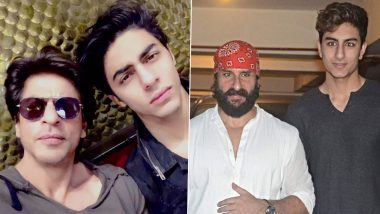 From being their first superhero to teaching them important lessons of life, a father is a mentor, a friend and a companion of a child from birth. And now, it's the time of year to celebrate this special bond. Father's day is observed on the third Sunday of June and this year, the special occasion to celebrate the world's purest relationship is on June 19. Father’s Day 2022 Wishes & HD Images: WhatsApp Stickers, GIFs, Facebook Messages, Quotes, Wallpapers and SMS To Celebrate Fatherhood.

Bollywood has always set a benchmark on how we should cherish our loved ones in reel life. And from Amitabh and Abhisekh Bachchan to Shah Rukh and Aryan Khan, the B-town is brimming with sons who have chosen to follow their father's footsteps and pursue acting as a career, leaving a hint that their real life is no different. Father’s Day 2022: Cristiano Ronaldo Posts Picture With his Kids on This Special Occasion.

Let's take a look at some of Bollywood's most popular father-son duos, who have frequently captured our hearts with their friendship and super-cool swag.

Amitabh Bachchan, the 'Shehanshaah' of Bollywood, is a true icon. He is the patriarch of all Bollywood fathers and his son Abhishek Bachchan followed in his footsteps. The actor married Aishwarya Rai, a Bollywood beauty, and they have a lovely daughter Aradhya Bachchan."Rishtey mein toh hum tumhare Baap lagte hai," the famous dialogue said by Amitabh Bachchan holds true in Bollywood for Abhisekh Bachchan in real life. No one will ever forget the 'Kajra re' duet, who shook the dance floor and topped the chart of the most-streamed dance number at the time. They have undoubtedly established themselves as the ideal son-dad tandem on television, whether it was in Sarkar, Paa, Bunty Aur Babli, or Kabhi Alvida Na Kehna.

Undoubtedly, they are one of the most loved father-son duo among fans and their voice-overs in The Lion King as Musafa and Simba won our hearts. The eldest son of SRK never fails to leave his female fans gawking with her captivating looks. He has already made his debut as a child actor in Karan Johar's Kabhi Khushi Khabi Gham. Following his footsteps, King Khan's youngest son AbRam Khan has also stepped into the entertainment industry with his film Happy New Year.

Starting with Apne, superstar Dharmendra and his two sons Sunny and Bobby demonstrated the strength of a family when all members are together. For Yamla Pagla Deewana, the three of them spelt their magic and are known to be a popular trio in the Bollywood industry. Father’s Day 2022 Gift Ideas: From Foot Massager to Cocktail Cook Book, 5 Gifts for Your Dad.

The Kapoor family has unquestionably established itself as one of the industry's top duos. Raj and Rishi Kapoor were the first to make the entertainment world a happy place, followed by Ranbir Kapoor, the late actor late Rishi Kapoor's son, who also reached a milestone in the profession. Besharam, directed by Abhinav Kashyap, starred the two in 2013. Ranbir's father, as well as her mother, Neetu Kapoor, played important roles.

Never-aging Kapoor, Anil Kapoor is gearing up for the next round of father-son duo goals with Harshvardhan Kapoor's Thar. Harsh Varrdhan and Anil's second collaboration, following filmmaker Vikramaditya Motwane's AK vs AK in 2020, is the Netflix film.

Tusshar Kapoor, the star of Golmaal, is the son of Bollywood superstar Jeetendra and Shobha Kapoor. Tusshar opted for surrogacy and became a father to son Laksshya Kapoor in June 2016. His sister Ekta Kapoor is a television and film producer.

The famous kids, who are all under the age of 20, have the same facial features as their fathers. It appears that Saif has given birth to a copy of himself, who, like his father, will be able to demonstrate his acting abilities.Ibrahim has already modelled for Indian designers Sandeep Khosla and Abu Jani, as well as appearing in a number of publications. He is attracting a lot of attention and has a lot of admirers on social media even before his debut. He is the brother of famous actress Sara Ali Khan. Not only that, but Saif Ali Khan's other two sons, Taimur Ali Khan and tiny Jehangir Ali Khan are also extremely loved. Happy Father’s Day 2022 Wishes & Greetings: Send HD Images, WhatsApp Stickers, Facebook Messages, Telegram Photos, Fatherhood Quotes, Wallpapers & Colourful GIFs To Celebrate The Special Day.

Even now, successful actor Pankaj Kapur's films are a joy to watch. Shahid Kapoor, his son, is also a popular actor who has ruled millions of hearts for decades. He married Mira Rajput and has two kids Misha Kapoor, and Zain Kapoor.