Hollywood star George Clooney has condemned the attack on the Capitol Hill in the US by thousands of supporters of Donald Trump saying that the president's name will now forever be associated with insurrection. 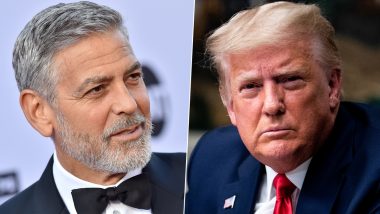 Hollywood star George Clooney has condemned the attack on the Capitol Hill in the US by thousands of supporters of Donald Trump saying that the president's name will now forever be associated with "insurrection". According to The Hollywood Reporter, during an appearance on the The Business weekly podcast, "The Midnight Sky" star said it was "devastating" to watch the people's house being "desecrated". Not Kanye West or Joe Biden, Did Kim Kardashian Vote for Donald Trump? Her Fans Think So Thanks to Her “I Voted” Pic!

"This puts Donald Trump, Donald Trump Jr. Ivanka, all of them, into the dustbin of history. That name will now forever be associated with insurrection," Clooney said. The Trump supporters on Wednesday clashed with police at the Capitol, where members of the Congress were going through the process of counting and certifying the Electoral College votes. The violent attack resulted in at least four deaths and interrupting a constitutional process to affirm President-elect Joe Biden's victory in the election. Kanye West Claims He Is Ahead of Donald Trump, Joe Biden in Kentucky Using Fake Polling Data of US Presidential Elections 2020

Clooney said the incident was "the straw that broke the camel's back".

"It is also a tremendous overreach in a way -- everybody kept waiting for, what's the one thing, the straw that breaks the camel's back and it just seemed like that line just kept getting moved and moved and moved and outrage didn't even matter anymore, even to the point of calling the Secretary of State in Georgia and pressuring him. None of that seemed to matter. This mattered."

The 59-year-old actor believes something hopeful will come out of this "disaster". "If this is what it takes to set us on the right path, I think that, not that it's worth it, it's not worth it in any shape or form, but at least we should find something hopeful to come out of some of this disaster," he said. Prior to Clooney, Hollywood stars Chris Evans, Mark Ruffalo, James Mangold, Sacha Baron Cohen, Josh Gadh, James Gunn, veteran singer Stevie Wonder, Selena Gomez and rapper Cardi B among others criticised the attack.

On Friday, Trump also condemned the violent supporters who stormed the US Capitol, saying they do not represent America, as he vowed to ensure a peaceful and smooth transition of power to President-elect Joe Biden.

"Now, Congress has certified the results a new administration will be inaugurated on January 20th. My focus now turns to ensure a smooth, orderly and seamless transition of power,” he said.