Not Kanye West or Joe Biden, Did Kim Kardashian Vote for Donald Trump? Her Fans Think So Thanks to Her “I Voted” Pic!

Some of Kim's fans supported her choice and said, “Good for her! She has a right to vote whatever way she wants! Don’t be a bully just because you have different views,” while other rubbished the theory by saying: “So? I wore green when I dropped off my ballot." 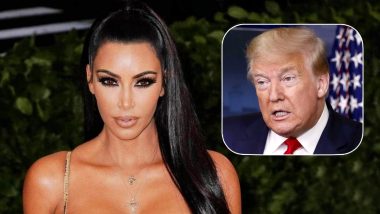 US Elections 2020 has everyone sitting with bated breath. The tough competition between Democrats' Joe Biden and Republicans' Donald Trump is making everyone anxious to a great extent. Amongst the frenzy, many Hollywood celebrities like Selena Gomez, Cardi B, Kanye West, Lady Gaga shared pictures of them after they had cast their vote. Kim Kardashian also shared a picture after voting, only for theories to surface that she has voted for Donald Trump. Kim Kardashian West Meets US President Donald Trump to Discuss Prison Reform Policies.

It so happened that Kim posted a picture with a sticker on her finger that read, "I Voted". She wore a red dress in the picture which led to the speculations of her voting for Trump. Fans flooded her post with theories around how the red dress indicated support from Trump. Seeing the increasing buzz around it, Kim decided to remove the post and reshare it in black n white.

If you are in line when the hours of operation close at the polls, they are required to stay open and allow you to vote, so do not get out of line. pic.twitter.com/QXsU4JPdCw

The original picture ..... with the RED confidently showing. pic.twitter.com/Mz4Ql0OkuE

Some of Kim's fans supported her choice and said, “Good for her! She has a right to vote whatever way she wants! Don’t be a bully just because you have different views,” while other rubbished the theory by saying: “So? I wore green when I dropped off my ballot. The colour of your shirt doesn’t mean much.”

Well, it is not a hidden fact that Kim Kardashian's husband Kanye West is a firm supporter of Donald Trump. While he might have been a write-in candidate for this election, Kanye has often spoken about his faith in Trump. The couple has also often been spotted at the White House where they met Trump for different reasons. Kanye West Admits Defeat in US Presidential Elections 2020, Looking Forward to 2024 Elections Already!

As for Kanye, the rapper won a few votes yesterday during the polls for his party named "Birthday Party". Seeing the disappointing results, he gave up on the elections and announced that he is prepping for 2024 elections already. While Kanye may not realise it, his stint is helping a lot of people on social media in keeping the anxiety of the election away!

(The above story first appeared on LatestLY on Nov 05, 2020 01:50 PM IST. For more news and updates on politics, world, sports, entertainment and lifestyle, log on to our website latestly.com).