An AAP leader was found hanging at his residence in west Delhi's Rajouri Garden area on Thursday, police said. Sandeep Bhardwaj (55), Aam Aadmi Party's trade wing secretary, was rushed to the Kukreja Hospital by his friend, they said. 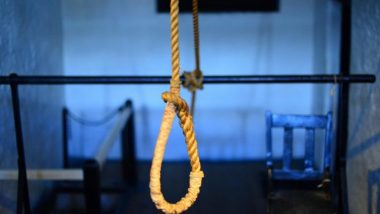 The police received information from the Hospital that Bhardwaj, a resident of Rajouri Garden, was brought dead from his residence, Deputy Commissioner of Police (West) Ghanshyam Bansal said. Delhi: Student Jumps to Death From College Building, Suicide Note Recovered.

The crime team was called to the spot. Inquest proceedings under section 174 CrPC is being conducted as per law, police said. Delhi Shocker: Constable Commits Suicide Inside Police Barrack in National Capital.

The deceased was the owner of Bhardwaj Marbels and was a divorcee who lived with his two daughters and a son, police added.