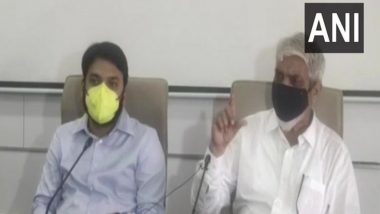 Pune , May 29: Maharashtra Agriculture Minister Dada Bhuse on Thursday informed that around 50 per cent locust swarms were killed in the state by the agriculture department.

"Around 50 per cent locust swarms were killed in Maharashtra by the agriculture department. Fire brigade vehicles are being used for spraying insecticides. We are providing chemicals/insecticides to farmers free of cost in the affected areas," Bhuse said. Locust Swarm Attacks North India: Scary Pics and Videos of 'Tiddi Dal' From Rajasthan, Madhya Pradesh and Uttar Pradesh Worry Farmers.

Meanwhile, local administration in Bhandara sprayed disinfectant to fight locust attack and locals beat drums to drive away the insects.

In a bid to control the locust attack in the country, Union Agriculture Minister Narendra Singh Tomar on Thursday said that 15 sprayers will arrive from Britain in the next 15 days.

Tomar on Thursday held a high-level meeting to review locust control operations in the country. The Centre is in close touch with affected states and an advisory has been issued.

"Forty-five more sprayers will be procured in a month or one-and-a-half months. Drones will be used to spray pesticides on tall trees and inaccessible places for effective control of locusts, while plans are afoot to deploy helicopters for aerial spray," the ministry said.

Rajasthan is the most affected state, the spokesperson informed. The desert locust is a species of locust, a swarming short-horned grasshopper. They are known to devour everything in their path, posing an unprecedented threat to food supply and livelihoods of millions of people.