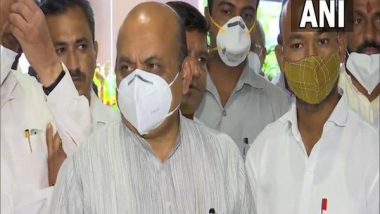 Addressing the reporters briefly in Delhi on Monday, Bommai said, "We are going to meet under the leadership of BJP National President JP Nadda ji today to discuss comprehensively about cabinet formation in the state."

Earlier on Friday he met Prime Minister Narendra Modi and sought approval for All India Institute of Medical Sciences (AIIMS) in Hubballi-Dharwad.

Bommai also sought approval for an AIIMS-like institute in Raichur, identified as an aspirational district by the NITI Aayog. He also appealed for upgrading the Employees' State Insurance Corporation (ESIC) Medical College and Hospital in Kalaburagi to the Regional AIIMS-like institute.

Bommai took oath as the 23rd Chief Minister of Karnataka on July 28, two days after the resignation of BS Yediyurappa. (ANI)