Slamming Telangana Chief Minister K Chandrashekar Rao over his remarks that the Constitution should be rewritten, BJP leader and former MLC N Ramchander Rao said the party will file sedition cases against the TRS supremo. 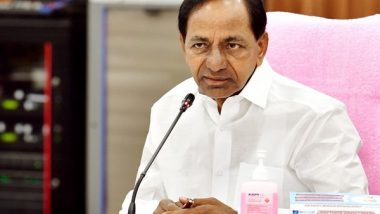 Rao said Babasaheb Ambedkar and many other academicians, legal teams and politicians dedicated so much effort to writing the Constitution. The Supreme Court has given the verdict that the basic structure of the Constitution should not be changed, then how can the chief minister demand the same.

Also Read | Assembly Elections 2022: Who Are The Preferred Leaders to Become Chief Minister of Their State?.

"It is against the spirit of the Constitution and spirit of India. BJP thinks there is a seditious angle in the statement of KCR. It is an insult to Ambedkar and others who wrote the constitution," the BJP leader said.

He further said BJP has decided to take legal action and file cases in all the courts of Telangana and also to demonstrate to the court during the lunch hour when the court starts Physically. The programme has been made by the legal cell of BJP in the presence of State President Bandi Sanjay.

Also Read | Here Are The 10 Main Issues on Which PM Narendra Modi Lambasted Congress in Parliament.

He alleged that the Telangana Rashtra Samithi (TRS) government was harassing the BJP workers filing false cases. He said the party is going to fight against this also and give legal assistance to the workers.

Stirring up a controversy, K Chandrashekar Rao had said that the time has come that the Constitution in India needs to be rewritten.

"We have to rewrite our Constitution. Nayi Soch, Naya Samvidhan should be brought in. The Constitution needs to be strengthened," he said while addressing a press conference on the union budget.