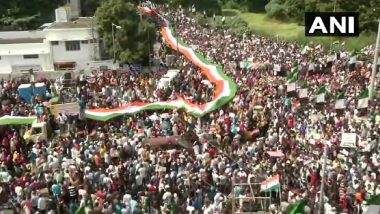 New Delhi, October 8: The Centre on Thursday permitted with certain conditions political gatherings in poll-bound Bihar and also in those constituencies where bypolls are to be held with the maximum number of people in a close space or a hall capped at 200 while in an open space, it will depend on the area.

The order issued by Union Home Secretary Ajay Kumar Bhalla is a slight modification of the reopening guidelines issued on September 30 where the political gatherings were allowed from October 15. Also Read | War Room in Delhi to Be Equipped With High-End Technology to Monitor Real-Time Pollution Data, NASA-ISRO Images of Stubble Burning: Gopal Rai.

The political gatherings can be held only outside the containment zones. "Now, therefore, in exercising the powers conferred under Section 10(2)(1) of the Disaster Management Act 2005, it is decided that the state governments concerned may permit political gatherings outside containment zones beyond the existing limit of 100 persons on any date before October 15, 2020 in those assembly / parliamentary constituencies only where elections are to be held subject to the following conditions," the order issued by Bhalla said. Also Read | ‘Fake BARC TRP Ratings’ Case: Republic TV to File Criminal Defamation Case Against Mumbai Police Commissioner, Says Arnab Goswami.

As per the conditions, for holding political gatherings in closed spaces, a maximum of 50 per cent of the hall capacity will be allowed with a ceiling of 200 persons and wearing of face masks, maintaining social distancing, provision for thermal scanning and use of hand wash or sanitizers will be mandatory.

In open spaces, the political gatherings could be keeping in view the size of the ground or space with strict observance of social distancing, provision for thermal scanning and use of hand wash or sanitizers. "State or Union Territory governments will issue detailed SOPs to regulate such political gatherings and strict enforce the same," the home secretary order said.

The September 30 guidelines had said state and UT governments have been given the flexibility to permit social, religious and political gatherings beyond the limit of 100 persons, outside containment zones, after October 15, which will be subject to the certain conditions like a maximum of 50 per cent of the hall capacity with a ceiling of 200 persons and mandatory wearing of face masks.

The three-phased Bihar assembly elections will begin from October 27. Bypolls will also be held in one Lok Sabha constituency and 56 assembly seats in different states.