In his remarks, Prime Minister Modi announced that the central government will provide free coronavirus vaccine to states for inoculation of all above the age of 18 from June 21, and asserted that vaccine supply would be increased significantly in the country in the coming days. 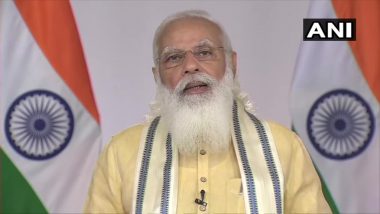 New Delhi, June 7: With several states taking steps towards unlocking and easing of restrictions amid a decline in COVID-19 cases, Prime Minister Narendra Modi on Monday cautioned people against any laxity and asserted that COVID-appropriate protocol is the "most effective weapon" against an unseen adversary like coronavirus that keeps changing its form.

"In many places, relaxations are being given in corona curfew but it does not mean that coronavirus has gone away. We have to remain cautious and also have to follow COVID protocols strictly. I am confident that we will win this battle and that India will win against coronavirus," he said.

In his address to the nation, the prime minister noted this is the biggest pandemic and the worst tragedy seen in the last 100 years and something that the modern world had never experienced, and asserted that India is fighting it on many fronts. Free COVID-19 Vaccine to States for All Above 18 Years Starting June 21, Says PM Narendra Modi.

Modi listed setting up of COVID hospitals, increasing ICU beds, manufacturing of ventilators and expanding the network of laboratories, among other measures, that he said have bolstered India's fight against coronavirus.

In the last one and a quarter years, a new health infrastructure has been created across the country to fight the pandemic, he asserted.

He said the country's fight against the second wave of the COVID-19 pandemic is continuing.

India has gone through a lot of pain during this battle and many lost their loved ones, Modi noted and extended his condolences to the bereaved families. Pointing out that during the second wave, the demand for medical oxygen in India increased unimaginably in the months of April and May, he said never in the history of India has the need for medical oxygen been needed in such quantity.

He asserted that to meet this demand, work was done on a war-footing with the entire machinery of government engaged in it, he said. Pointing to measures such as running of 'oxygen rail' and deploying of Navy and Air Force, Modi said liquid medical oxygen production was increased more than 10 folds in a short span of time. He also said production of essential medicines ramped up.

"COVID protocol is the most important weapon against an adversary like coronavirus which is unseen and keeps changing its form -- Mask, 'Do Gaz ki Doori' and other such protective measures," Modi said in his about half-an-hour address.

In his remarks, Prime Minister Modi announced that the central government will provide free coronavirus vaccine to states for inoculation of all above the age of 18 from June 21, and asserted that vaccine supply would be increased significantly in the country in the coming days.

The Centre has decided to buy 75 per cent of jabs from vaccine makers, including 25 per cent of the state quota, and give it for free to state governments, the prime minister said. Modi said private sector hospitals can continue to procure 25 per cent of vaccines, but their service charge would be a maximum of Rs 150 per dose over the fixed price of the vaccine.

Asserting that in the fight against coronavirus, vaccine is like a protection shield, Modi urged people to spread awareness about vaccines. Modi said seven companies are producing various vaccines against the coronavirus in the country and trials of three more vaccines is at an advanced stage. India Reports Over 1 Lakh New COVID-19 Cases in Past 24 Hours, Lowest Spike Since April 5.

The process of procuring vaccines from companies of other countries has also been expedited, the prime minister said. Amid concerns expressed by some experts recently over children being affected by the virus, Modi said trials of two vaccines are being carried out in this direction.

Modi said research is continuing on a nasal spray vaccine which, if successful, can significantly boost India's vaccination drive, he said. As several states such as Maharashtra and Delhi ease restrictions and take steps towards unlocking amid a decline in COVID cases, Modi cautioned people against complacency.

The prime minister also warned against people who are spreading rumours against vaccination and said such people are playing with the lives of people and there was a need to stay vigilant against them.