COVID-19 Museum To Come Up in Kolkata To Commemorate Pandemic Fight, Will Showcase PPE Kits, Masks, Gloves and Sanitisers

Also, how different countries tried to fight it out will be depicted," said Dr Arjun Dasgupta, who mooted the idea of the museum. 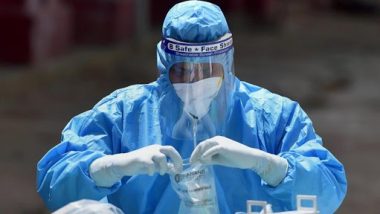 Kolkata, January 13: To commemorate the frontline workers who died in the battle against the coronavirus and document how lives have changed amid the pandemic, doctors are planning to set up a museum in Kolkata.

The museum will showcase items like PPE kits, masks, gloves and sanitisers, besides several other materials that became essential in the fight against the virus, West Bengal Doctors' Forum (WBDF) office-bearer Dr Rajiv Pandey said on Wednesday. A proposal has been sent to the state government and a final nod is awaited, Dr Pandey said. Pune-Based Cricket Museum Buys Pakistan Test Captain Azhar Ali's Bat to Raise Funds to Fight COVID-19.

"This pandemic has come after more than 100 years, even our grandparents have never seen something that we are witnessing," he told PTI. "We have already lost around 90 doctors in our state to the pandemic. Like so many other things, this time and these people will be forgotten. Future generations should not be allowed to forget the sacrifices made. That's the reason we have planned this museum," he said.

The museum will also tell stories of the people who lost their lives in the fight against the virus, he said. Even ambulances used to ferry patients will also be featured in the museum, Dr Pandey said. The museum will also have a memorial for the doctors who have succumbed to the disease.

"We will document how this pandemic unfolded -- how vaccines were invented and the fight of the entire mankind against the pandemic. Also, how different countries tried to fight it out will be depicted," said Dr Arjun Dasgupta, who mooted the idea of the museum.