The severe cyclonic storm 'Asani' is likely to recurve over the sea away from the coast, and would not cross Andhra Pradesh, Odisha, or West Bengal, India Meteorological Department (IMD) Senior Scientist RK Jenamani informed on Monday. At present, Jenamani said that the Asani is located around 450 and 500 km south of Visakhapatnam and Puri. 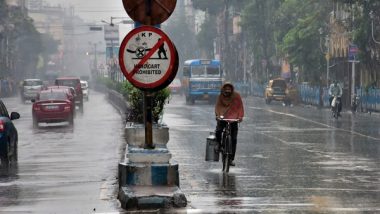 New Delhi, May 9: The severe cyclonic storm 'Asani' is likely to recurve over the sea away from the coast, and would not cross Andhra Pradesh, Odisha, or West Bengal, India Meteorological Department (IMD) Senior Scientist RK Jenamani informed on Monday. At present, Jenamani said that the Asani is located around 450 and 500 km south of Visakhapatnam and Puri.

"This system is a severe cyclonic storm at the moment. It is moving in a northwest direction with a speed of around 21 to 25 km in the last 12 hours. This will continue to move. It is moving towards north coastal Andhra Pradesh and Odisha," he said while adding that from tomorrow onwards, it will recurve. Cyclone Asani Live Tracker Map on Windy: Andhra Pradesh, Odisha, and West Bengal on Alert as Cyclone Asani Gathers Intensity; Check Real-Time Update.

The Met department has predicted heavy to very heavy isolated rainfall from May 10-11 over the district of north coastal Andhra Pradesh like East Godavari, Vijayawada and Visakhapatnam, Srikakulam and the coastal district of Odisha.

"It will recurve north-northeast away from the coast. So, only under its impact, we have predicted heavy to very heavy isolated rainfall. The cyclone is not crossing Andhra Pradesh, Odisha, or West Bengal. It is recurving over the sea away from the coast," he said.

Under the influence of Asani, some coastal districts of Odisha are expected to receive heavy rainfall from May 10 onwards. Senior Scientist of India Meteorological Department (IMD) Bhubaneswar Umashankar Das on Monday said that in the past hours, Cyclone Asani has moved nearly in the west-northwestwards direction with a speed of 25 kmph, and is expected to weaken into a cyclonic storm.

Speaking with ANI, Das said, "It's about 680 km in direction of the south-southeast of Puri and 580 km from Visakhapatnam. We are expecting that it will be further weakened into a cyclonic storm in the subsequent 48 hours and continue to move in the northwest direction till May 10 over west-central adjoining northwest of North Andhra and Odisha coast."

Light to moderate rainfall will also continue over districts of coastal Odisha. "Afterwards, it'll be recalled north-northeast and move towards north Odisha coast. We're expecting heavy rainfall under its influence from May 10 onwards over some Odisha coastal districts. Light to moderate rainfall to continue over districts of coastal Odisha," Das added.

The cyclonic storm with gusting 120 km per hour wind speed lay centred about 550 km southeast of Vishakhapatnam and 680 km south-southeast of Puri today according to an IMD bulletin this morning.

"It is very likely to move northwestwards till May 10 and reach Westcentral and adjoining Northwest Bay of Bengal off North Andhra Pradesh and Odisha coasts," the IMD said."Thereafter, it is very likely to recurve north-northeastwards and move towards Northwest Bay of Bengal off Odisha coast. It is likely to weaken gradually into a Cyclonic Storm during the next 48 hours," the bulletin said.

According to the Indian Indian Meteorological Department (IMD) Kolkata, thunderstorms and moderate rainfall are likely over some parts of Howrah, Kolkata, Hooghly and West Midnapur districts of West Bengal today. The weather forecaster has advised people to take shelter during thunderstorm activity.

Fishermen have been advised not to venture into the deep sea area over the central parts of the Bay of Bengal on May 9-10 and over the Northwest Bay of Bengal from May 10-12.

The Kolkata Municipal Corporation (KMC) has put on alert its employees and disaster management teams in view of the Cyclone. Cyclone Asani is a name given by Sri Lanka that means 'wrath' in Sinhalese.