Ram Mandir should be for unity of the country, not for a division of the country, he added. The 'bhumi pujan' or groundbreaking ceremony for the Ram temple is slated for August 5. 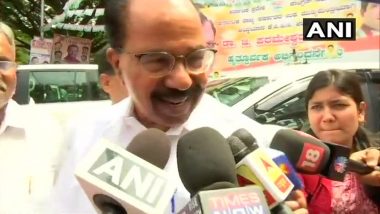 Bengaluru, July 30: Ahead of the ground-breaking ceremony for Ram temple construction at Ayodhya, senior Congress leader M Veerappa Moily on Thursday opposed use of the Lords image with bow and arrow for promotion of the 'mandir', saying it projects him as an aggressor which he was not.

The image of Ram with bow and arrow is more aggressive, Moily told PTI, adding, projecting it will not be inclusive, that will be exclusive. The former Karnataka chief minister said Prime Minister Narendra Modi should project the Bhumi Pujan occasion to unite the people belonging to all castes and religions. Also Read | Punjab CM Captain Amarinder Singh Seeks Views of the District Collectors on Opening of Gyms and Coaching Centres: Live News Breaking And Coronavirus Updates on July 30, 2020.

Lord Ram always tried to build bridges in society and was never an aggressor, Moily said. Touching upon portions of ancient epic Ramayana like Kishkindha and Lanka episodes, he said the Lord never sought to annex the two regions to Ayodhya and in fact crowned Sugriva and Vibhishana as kings, respectively.

He (Lord Rama) allowed independence to everybody. He wanted to create an inclusive society. That kind of concept will have to be projected, Moily said. The Congress had not opposed the construction of the Ram temple at Ayodhya, he said, noting that it was only during the time when Rajiv Gandhi was Prime Minister that we opened Ram mandir. We all adore Rama, Krishna, and all.

Congress is for inclusive society, not for exclusive society but the manner in which they demolished the Babri masjid, how many people were killed all over the countryit created friction, division. Ram Mandir should be for unity of the country, not for a division of the country, he added. The 'bhumi pujan' or groundbreaking ceremony for the Ram temple is slated for August 5.