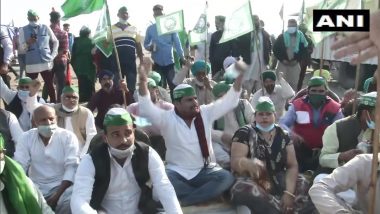 New Delhi, November 28: Playing the 'dafli' and singing songs about distress, a number of students from different universities have joined farmers in their protest against the Centre's three agriculture-related laws at the Delhi-Haryana border at Singhu.

Arpan, a student from the Punjab University and a resident of Chandigarh, said she has joined the farmers' agitation as she felt an "emotional connection" with their land. Also Read | Local PPE Company Provides Over 6 Million North Carolina Voters and Front-Line Workers With Supplies.

"We have come here along with farmers to support them. We have been living here with the farmers and are having food at the langars. We are also singing songs in Punjabi and Hindi to explain the condition of farmers," she said. Arpan further said, "Women are also protesting here as they are emotionally connected to their lands". Also Read | Amit Shah Reaches Out to Farmer Unions, Says Govt Ready for Talks Before Dec 3 If Protest Venue is Shifted.

At least around 25 to 30 students have come to the Singhu border from different parts of Haryana and Punjab, including Panipat, Jhajjar, Patiala, Chandigarh and Sonipat.

The students sat on the roads and sang songs about the difficulties faced by farmers', playing tambourines or 'daflis' and clapping along. They also ate the meals cooked by the protesting farmers in their makeshift community kitchens. Ankit, a student of Kurukshetra University, said he has come to Singhu along with farmers from Jhajjar district in Haryana.

"We have joined the farmers, we will follow them and do what they will do. We have come here by our own wish. We are eating with them, sleeping with them. They (farmers) are giving us food and treating us like their kids," Ankit said. Some students from Delhi have also joined the farmers in their protest.

Feroz Alam, a student of history at Delhi University who joined the farmers at Singhu border on Friday, said, "As a student, I have come here to extend my support to the farmers and will not move till the farmers' demands are accepted," Alam said.

Thousands of farmers stayed put at the Singhu and Tikri border points for the third consecutive day on Saturday amid heavy police presence. They rejected the police's offer of moving to a north Delhi ground to hold peaceful demonstrations.

The protesters' numbers swelled at the Singhu border point as the farmers gathered there since Thursday and Friday were on Saturday joined by more counterparts from Punjab and Haryana.