India News | Former CM HD Kumaraswamy to Undertake One More Round of Rathyatra in June, July

Get latest articles and stories on India at LatestLY. Former chief minister HD Kumaraswamy said that he will have one more round of "RathYatra" in villages in June and July. 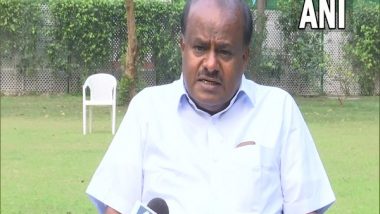 Bengaluru (Karnataka) [India], May 14 (ANI): Former chief minister HD Kumaraswamy said that he will have one more round of "RathYatra" in villages in June and July.

Speaking at the closing ceremony of Janata Jaladhare, held today, he said, "We will have one more round of "RathYatra" in the villages. I will come before the people."

"Deve Gowda is fighting for the people of the country even at the age of 90. As a result of the developments in politics, I was twice the Chief Minister of the State. But there was no independent authority to give any program."

"I only know about the pain that farmers have when they come up with a loan waiver," he added.

"Do not be afraid of any criticism, MP Prajwal Rewanna, Nikhil Kumaraswamy and Suraj Rewanna advised people to work with their hearts for the party," he stated.

"Some accused said tickets had been sold in JDS. But even the poor like Annadhani, have been given the ticket and the election expenses are borne by the party and he won," he further stated.

Taking a cue from a statement made by Nanjavadhootha Swami on the occasion, the two-time Chief Minister said, "I am the phoenix rising from the ashes." Earlier, referring to the promise that former Prime Minister H. D. Deve Gowda made on the floor of the Lok Sabha that he will rise like a phoenix during the vote of no confidence that he lost, Nanjavadhootha Swami had said Kumaraswamy too was like the phoenix. (ANI)