Get latest articles and stories on India at LatestLY. A Trinamool Congress (TMC) delegation met the Election Commission (EC) in Delhi regarding the upcoming Goa assembly polls. 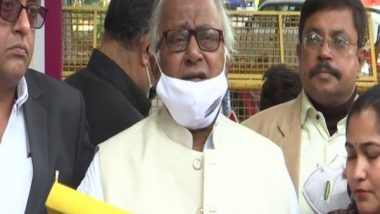 "On January 21 a team from EC raided the TMC party office in Goa at around 11 pm and vandalised hoardings and flexes while the office staff was kept on hold. Our meeting with the Election Commission was regarding that incident. We spoke for 25 minutes", claimed TMC leader and MP Saugata Roy.

"We told the EC that despite being aware of the new TMC office in Goa, vandalisation on their part was not right", alleged Roy. He claimed that earlier there has been an instance of throwing ink on Mamata Banerjee's photo. "Goa TMC in charge Sourabh Chakraborty was forced to get out of the car and searched", he claimed.

Roy said, "We don't want EC to attack us in this way". He claimed that EC had raided the party office based on somebody's complaint. "We don't know who made the complaint."

"There is a rule in Goa that you have to take prior approval before putting up a hoarding in the state. We sought their approval and they gave us 90 per cent permission to put up banners", said the MP. "We have told them that we will inform in case of further problem in Goa and asked them to stop midnight raids."

According to Saugata Roy, the EC has assured the party of a fair and free election in Goa.

"The Election Commission has assured that there will be free and fair elections and has also ensured that whenever any such complaint comes about other parties they will remain vigilant (as they were in our case)", said TMC MP Santanu Sen after meeting the EC in Delhi. (ANI)