Monsoon Session of Parliament 2021: Govt Plans To Introduce 17 Bills, Including 3 To Replace Ordinances

Three of the bills seek to replace ordinances issued recently. Once a session starts an ordinance has to be passed as a bill within 42 days or six weeks, else it lapses. 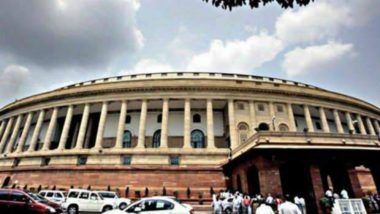 New Delhi, July 14: The government has listed 17 new bills for introduction in the Monsoon session of Parliament beginning July 19. Three of the bills seek to replace ordinances issued recently. Once a session starts an ordinance has to be passed as a bill within 42 days or six weeks, else it lapses.

One of the ordinances was issued on June 30 prohibiting any agitation and strike by anyone engaged in the essential defence services. The Essential Defence Services Ordinance 2021 came in the backdrop of the announcement by major federations of the Ordnance Factory Board (OFB) to go on indefinite strike from the later part of July to protest the government's decision to corporatise the OFB. Monsoon Session of Parliament: Lok Sabha Speaker Om Birla Calls All-Party Meet on July 18.

The Essential Defence Service Bill, 2021 has been listed to replace the ordinance, according to a Lok Sabha bulletin issued on July 12. The Commission for Air Quality Management in National Capital Region and Adjoining Areas Bill, 2021 is another bill that seeks to replace an ordinance.

According to the government, the ordinance was brought to provide a permanent solution and establish a self-regulated, democratically monitored mechanism for tackling air pollution in the NCR and adjoining areas, rather than limited ad-hoc measures.

The government has also listed The Indian Antarctica Bill, 2021 for introduction. The proposed bill seeks to provide a harmonious policy and regulatory framework for India's Antarctic activities and to provide national measures for protecting the Antarctic environment and dependent and associated ecosystem as per the Antarctic Treaty, according to the details available in the Lok Sabha bulletin. The Petroleum and Minerals Pipelines (Amendment) Bill, 2021 seeks to make the system of laying of pipelines for transportation of Petroleum and Minerals, robust. The government has also listed 'The Electricity (Amendment) Bill, 2021' fr introduction in the session.

"The proposed amendments entail de-licensing of the distribution business and bring in competition, the appointment of a member from law background in every Commission, strengthening of APTEL, penalty for non-compliance of RPO, prescribing rights and duties of consumers," according to details available in the bulletin. The proposed 'The Trafficking of Persons (Prevention, Protection and Rehabilitation) Bill, 2021 listed for introduction seeks to prevent and combat trafficking in persons, especially women and children.

It is aimed at providing care, protection, assistance and rehabilitation to the victims, while respecting their rights, and creating a supportive legal, economic and social environment for them, and also to ensure prosecution of offenders.

According to the financial business listed in the bulletin, there would be a presentation, discussion and voting on Supplementary Demands for Grants for the year 2021-22.

There would also be a presentation, discussion and voting on Excess Demands for Grants for the year 2017-18. Six other bills are pending in various stages before the two Houses and parliamentary panels.