Rashtriya Loktantrik Party (RLP) leader Hanuman Beniwal on Thursday hit out at BJP state in-charge and party's national general secretary Arun Singh for reportedly saying that the RLP did not have credibility. 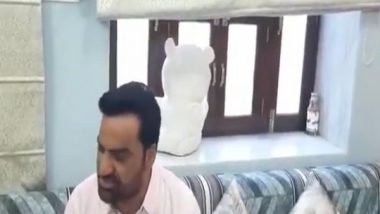 In a series of tweets, Hanuman Beniwal said that Arun Singh had no mass base and he could not even fight the election of sarpanch and challenged him to contest the Lok Sabha elections and see who has the power.

"If you want to see the mass base of RLP, then accept a challenge. Get a resignation letter from some BJP MPs in Rajasthan and after that, I also contest Lok Sabha elections from RLP by resigning from the post of MP, after that you can send those BJP MPs to seek election again," he tweeted.

Beniwal took a dig at Arun Singh by tweeting that becoming a Rajya Sabha MP and being in charge of a state is a part of kindness.

"@ArunSinghbjp ji becoming a Rajya Sabha MP and being in charge of a state is a part of kindness, you do not have any mass base of your own because if you would have been elected as sarpanch," he said.

He further alleged that Arun Singh has come to the Rajya Sabha only by the grace of Rajnath Singh and has been made in-charge of Rajasthan.

"Gehlot-Vasundhara alliance is well known and you also know this thing @ArunSinghbjp ji, as far as credibility is concerned, people have made me MLA three times and MP once because of trust and you have come to the Rajya Sabha only by the grace of Rajnath Singh ji that you have been made in-charge of Rajasthan," Beniwal added said in a tweet.

Beniwal further stated that Arun Singh should not forget that RLP MLAs in Rajasthan had voted in favor of BJP candidates without any conditions when the floor test was going on in the Rajasthan assembly.

"He should remember that when the Gehlot government was in crisis and when the floor test was going on in the Rajasthan assembly, the MLAs of @RLPINDIAorg @ stood unconditionally with BJP4Rajasthan," he said.

He slammed Arun Singh and said that he does not have any mass base of his own, nor does he have any knowledge in the context of Rajasthan.

Talking about the alliance of RLP and BJP, Hanuman Beniwal said that BJP had benefited from the alliance in the Lok Sabha elections.

"@ArunSinghbjp ji should not forget that when the alliance of @RLPINDIAorg and @BJP4India was formed before the Lok Sabha elections, not only in Rajasthan but also in other states, BJP had benefited and in Rajya Sabha elections also 3 MLAs of @RLPINDIAorg unconditionally joined BJP and supported the candidates," Beniwal added.

RLP had contested the 2019-Lok Sabha elections in alliance with the BJP but later in December last year, Beniwal quit the BJP-led National Democratic Alliance over the issue of farm laws.

On December 19, 2021, Beniwal resigned from three parliamentary committees- Standing Committee on Industries, Petition Committee and Petroleum and Natural Gas Ministry's Consultative Committee - to register his protest against the government over the farmers' agitation. (ANI)