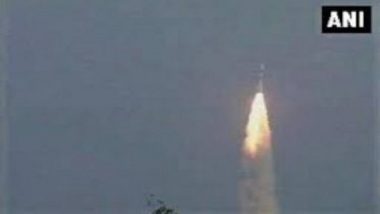 It said the missile "accurately and successfully" neutralised an airborne target. It was the second successful test firing of the missile in the last five days. Also Read | BJP’s 8 MLAs-Elect Who Won Gujarat Assembly Bypolls to Take Oath on Auspicious Day of ‘Labha Pancham 2020’.

"The flight test, second in the series, was conducted today at around 1542 hours from the integrated test range, Chandipur, off the coast of Odisha. "The test was carried out once again, against the high-performance jet unmanned aerial target called Banshee, which simulates an aircraft," the ministry said. Defence Minister Rajnath Singh congratulated DRDO scientists on the successful test-firing of the missile.

"Congratulations to @DRDO_India for two back to back successful test trials of Quick Reaction Surface to Air Missile. First launch test on 13th Nov proved the Radar and Missile capabilities with direct hit. Today's test demonstrated the warhead performance on proximity detection," he tweeted.

The successful test-firing of the QRSAM, having a range of around 30 km, paves the way for its commercial production, officials said. "The flight test was conducted in the deployment configuration of the weapon system comprising of the launcher, fully automated command and control system, surveillance system and multi-function radars," the ministry said.

"The QRSAM weapon system, which can operate on the move, consists of all indigenously developed subsystems. All objectives of the test were fully met. The launch was carried out in the presence of the users from Indian Army," it said. Also Read | Andhra Pradesh Beaches Fill Up With Thousands of People During Community Lunches as Part of Month-Long 'Karthikamasam'.

In the last two months, India has test-fired a number of missiles including a new version of the surface-to-surface supersonic cruise missile BrahMos and an anti-radiation missile named Rudram-1.