The three partners in the Maha Vikas Aghadi (MVA) government in Maharashtra have appealed to the people to wholeheartedly support Monday's state-wide bandh called by them to protest the killing of four farmers in Uttar Pradesh's Lakhimpur Kheri. 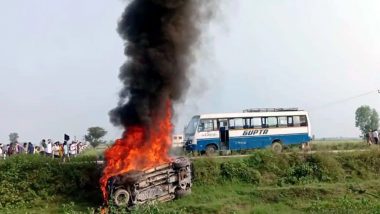 Mumbai, October 10: The three partners in the Maha Vikas Aghadi (MVA) government in Maharashtra have appealed to the people to wholeheartedly support Monday's state-wide bandh called by them to protest the killing of four farmers in Uttar Pradesh's Lakhimpur Kheri.

"The state-wide bandh will commence from 12 midnight," NCP spokesman and state minister Nawab Malik said on Sunday. The workers of Shiv Sena, NCP and Congress are meeting citizens with an appeal to participate in the bandh wholeheartedly and express their solidarity with farmers, he said. Also Read | Union Bank Of India Withdraws ‘Navaratri Colour Dress Code’ Circular After Facing Furore on Social Media.

"The BJP-led central government has allowed the loot of agriculture produce through the three newly-enacted farm laws and now the kin of its minister is killing farmers. We have to show solidarity with the cultivators," he said. The MVA demands that Union Minister of State for Home Ajay Mishra be sacked, the NCP leader added.

"It was only after the Supreme Court's intervention that the minister's son was arrested," he said. The Union minister's son Ashish Mishra was arrested on Saturday night by the police in Lakhimpur Kheri in connection with the October 3 violence there. He was named in an FIR following allegations that he was in one of the vehicles that mowed down four farmers protesting over UP Deputy Chief Minister Keshav Prasad Maurya's visit last Sunday.

Meanwhile, Maharashtra Congress president Nana Patole said the workers and leaders of his party would observe "maun vrat" (vow of silence) outside the Raj Bhavan in Mumbai to register their protest. "We appeal to all Congress workers and people to participate in the bandh and ensure its success," he said.

Shiv Sena's Rajya Sabha member Sanjay Raut had on Saturday said his party would participate in the bandh with full force. He had also said that it was necessary to wake people up against the "anti-farmer" policies of the central government. The three ruling allies have made it clear that the bandh was not state government-sponsored, but called by the parties.

The Kisan Sabha has extended support to the bandh and said its workers in 21 districts of the state are coordinating with the like-minded organisations to ensure that the bandh gets good response.