Over 300 drones and unidentified flying objects have been sighted along the sensitive border with Pakistan post the 2019 abrogation of Article 370, central security agencies have said, even as they grapple to find a suitable technology to check these lethal sky-floaters. 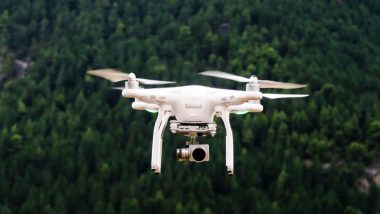 New Delhi, June 28: Over 300 drones and unidentified flying objects have been sighted along the sensitive border with Pakistan post the 2019 abrogation of Article 370, central security agencies have said, even as they grapple to find a suitable technology to check these lethal sky-floaters.

A multitude of border security agencies have also been testing some indigenously-built counter-drone technologies in the rough jungle terrains, desert and marshes along the western front but have had little success till date, officials told PTI Monday. Jammu Air Force Station Blast: Drones, Used To Carry Out Attack, Dropped Explosives and Returned, Say Sources.

The lead security agency -- the Border Security Force (BSF) -- and the frontier units of various police units along the 3,323-km-long front have since adopted a standard operating procedure of 'sight and blight' in case a drone, an unidentified flying object or a remotely-operated aerial vehicle is spotted in the air.

"The existing system to kill an enemy drone is that the security guard has to be vigilant on the ground and the sky and as soon as a drone is sighted, it has to be blighted or neutralised by plain shooting from the service weapon like INSAS rifles," a senior officer explained.

Data prepared and shared by the central security agencies with the government said over 300 "definite sightings" were made by the BSF and other police units after August 5, 2019, when Jammu and Kashmir's special status under Article 370 was withdrawn and it was bifurcated into two Union Territories of Jammu-Kashmir and Ladakh.

There were 167 sightings of drones along the western front (largely Jammu and Punjab) in 2019, 77 last year and about 60 this year till now, as per the data.

"These are minimum or to say the confirmed sightings by BSF troops and other security agencies personnel along the India-Pakistan border," a senior officer in the security establishment said.

There could be 50-60 more such sightings which are not included in the data for reasons like capturing only the whirring sound of the drone, difficulty to differentiate between a balloon and a drone and un-specified suspicious flying objects, the officer said.

Officials said the BSF also tested a prototype of a counter-drone system along this front in October, 2019 while some similar trials were held at its campus in Bhondsi near here around the same time.

The latter was part of a multi-stakeholder national conference held by the central police think tank-- the Bureau of Police Research and Development (BPRD).

"What is largely available technology at present is a circular counter-drone security system that is suited well to secure a military installation or campus," another officer said on the condition of anonymity. "What is required for border security is a linear 'sky fence' like interception, jamming and destruction system which is not available as of now."

Indian habitations and important bases all along the Pakistan border are the most vulnerable when it comes to attacks by a single or a swarm of drones, he said.

This is because, the officer said, infiltration has become very tough due to the effective domination by security forces in anticipation of the terrorist designs post August, 2019, regular unearthing and plugging of the under-ground tunnels and a ceasefire recently agreed upon by the two neighbours, he said.

On Sunday, two drones are stated to have dropped their explosive payload at the IAF station in Jammu making it the first case of an UAV attack on a military base in the country.

A drone gun is capable of jamming the radio, global positioning system (GPS) and mobile signal between the drone and the pilot and forces the drone to ground in good time before it could carry out its destructive design or secret reconnaissance mission.

Another solution being looked at is the sky fence system that uses a range of signal disruptors to jam the flight path and prevent the drones from entering their target, a sensitive installation or an event venue.

ATHENA, which stands for Advanced Test High Energy Asset, is another weapon under analysis as it works by firing a high energy laser beam on a rogue drone resulting in its complete destruction in the air.

A counter-UAV technology called drone catcher-- that swiftly approaches an enemy drone and grabs it by throwing a net around it-- is also being thought upon.