A multi-storey building collapsed due to a landslide triggered by recent rains in Shimla on Thursday evening. 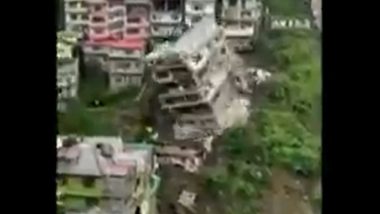 Shimla, September 30: A multi-storey building collapsed due to a landslide triggered by recent rains in Shimla on Thursday evening, a senior official said. The incident took place at Ghoda Chowki near Hali Palace in Shimla at 5.45 pm, State Disaster Management Director Sudesh Kumar Mokhta said. What Is a Landslide? What Causes a Landslide and What Are the Factors Responsible for It? All You Need To Know.

Multi-Storey Building Collapses Due to Landslide in Shimla:

#WATCH | A multi-storey building collapsed at Kachi Ghati area of Himachal Pradesh's Shimla district on Thursday evening, no loss of life was reported.

A probe has been ordered by the government to look into the incident, said Urban development minister Suresh Bhardwaj. pic.twitter.com/IoNHk3yXmF

No casualties have been reported in the incident so far, he said. A video of the building collapse is also doing the rounds on social media.