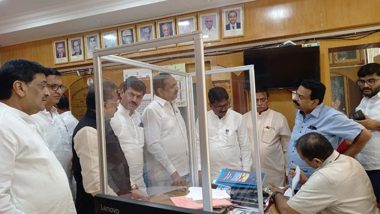 "We have filed the nomination of Shiv Sena MLA Rajan Salvi. Congress had the first claim but we sat down with Shiv Sena and NCP and this decision was taken together," said Congress leader Balasaheb Thorat. Election for the  post will be held on Sunday.

The Maha Vikas Aghadi--a tripartite alliance of Shiv Sena, Nationalist Congress Party (NCP), and Congress, formed the government in the State following Assembly elections in 2019 but it collapsed after 40 rebel Shiv Sena MLAs led a revolt against the Uddhav Thackeray-led party.

After the election of the Speaker, the newly formed Eknath Shinde government in Maharashtra will face a Vote of Confidence on July 4, to prove its majority in the State Assembly. The post of Speaker has been vacant following Congress MLA Nana Patole's resignation last year.

A day after the resignation of Thackeray from the chief ministerial post, Shinde and BJP leader Devendra Fadnavis met Governor Bhagat Singh Koshyari and staked claim to form the government in the state. Fadnavis, who was Chief Minister of Maharashtra from 2014-19, announced at a joint press conference in Mumbai on Thursday that he will not be part of the government.

However, later, on the direction of the BJP's central leadership, Fadnavis took oath as the Deputy CM. The Eknath Shinde camp, which had stayed mostly in Guwahati during the revolt, said that Congress and Nationalist Congress Party (NCP) are Shiv Sena's traditional rivals. They had earlier urged Uddhav Thackeray to stitch a "natural alliance" with the BJP.

Thackeray resigned on Wednesday after the Shinde-led group kept adding to its numbers and the Supreme Court gave a go-ahead for a floor test in the assembly. BJP and Shiv Sena had fought the 2019 assembly polls together but differences cropped up over the post of Chief Minister.