Get latest articles and stories on India at LatestLY. Tripura Chief Minister Manik Saha on Monday resigned as a member of the Rajya Sabha resulting in another vacancy in the Upper House. 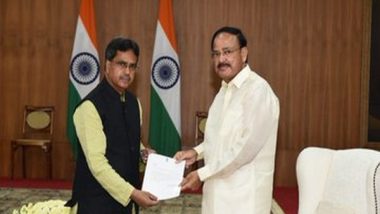 New Delhi [India], July 5 (ANI): Tripura Chief Minister Manik Saha on Monday resigned as a member of the Rajya Sabha resulting in another vacancy in the Upper House.

Rajya Sabha declared the seat vacant after his resignation was accepted.

A Parliamentary Bulletin reads, "Manik Saha, an elected Member of the Council of States (Rajya Sabha), representing the State of Tripura, resigned his seat in the Rajya Sabha and his resignation has been accepted by the Chairman, Rajya Sabha with effect from July 4, 2022."

Saha met Rajya Sabha Chairman M Venkaiah Naidu to submit his resignation on Monday after he was elected to the Legislative Assembly of Tripura in the recently held Assembly bypoll.

The Chief Minister contested the Assembly bypoll from the Town Bardowali constituency and won the polls by a margin of 6,104 votes.

He is presently serving as the 11th Chief Minister of Tripura.

In a sudden turn of events, Saha was sworn in as the chief minister of Tripura on May 15 after the BJP decided on a leadership change in the state a year ahead of the Assembly elections by replacing Biplab Kumar Deb with Saha as the Chief Minister.

Tripura unit of the BJP leaders was surprised with the choice of Manik Saha as chief minister as he was elected to the Rajya Sabha from the lone seat barely two months ago.

The 69-year-old was elected to the Rajya Sabha on April 3 in the biennial election to the Upper House.

Bharatiya Janata Party is currently the single largest party in the Rajya Sabha.

Saha is also the chief of the party in the state. Saha joined the BJP in 2016 after quitting Congress. He was made state party chief in 2020 and elected to Rajya Sabha in March this year.

The polls in the state are likely to be held in March next year. (ANI)