Sanjay Raut Targets BJP, Says Shiv Sena Was Treated as 'Slaves' When it Was Part of the BJP-Led Government in Maharashtra

Shiv Sena MP Sanjay Raut on Sunday alleged that the Shiv Sena was virtually treated as "slaves" and attempts were made to finish off the party politically when it was in power with the BJP in Maharashtra from 2014 to 2019. 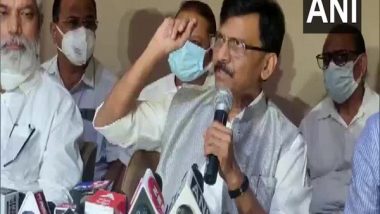 Jalgaon, June 14: Shiv Sena MP Sanjay Raut on Sunday alleged that the Shiv Sena was virtually treated as "slaves" and attempts were made to finish off the party politically when it was in power with the BJP in Maharashtra from 2014 to 2019.

Addressing a meeting of party office-bearers in Jalgaon Raut said, "Despite the fact that Shiv Sena was in power during the past 5 years, attempts were made to eradicate Shiv Sena's presence from every village. We were treated like slaves." Sanjay Raut Responds to Amit Shah's Accusation On Maharashtra CM Uddhav Thackeray, Says 'Closed Room' Benefited BJP as Well.

However, after the meeting, Thackeray has said, "We (BJP and Shiv Sena) may not be politically together but that does not mean our relationship has broken.

'Main koi Nawaz Sharif se nahi milne gaya tha' (I didn't go to meet Nawaz Sharif). So if I meet him (PM) separately in person, there is nothing wrong with it".

Raut on Sunday also addressed speculations of a possible turmoil in the Shiv Sena, Nationalist Congress Party (NCP) and Congress Maha Vikas Aghadi government in the state, and said, "It is a rumour that Shiv Sena Chief Minister will be replaced after two and a half years. When three parties formed the government, they committed and decided that the Chief Minister will be Uddhav Thackeray for five years. If someone talks about this, then it is nothing but a lie and rumour."

However, he added that it is not a "merger but an alliance" of three parties and all are free to expand and strengthen their party. "We do not have any commitment to contest every election together. In local polls, local leaders take the decision. We only strategise for Lok Sabha and state elections," he stated.

The BJP-Shiv Sena alliance ended after the 2019 Maharashtra Assembly polls over the issue of chief ministership.