The Supreme Court on Wednesday stayed the Tripura High Court orders that had sought from the Centre the details of threat perception based on which security cover was provided to Reliance Industries chairman Mukesh Ambani and his family in Mumbai. 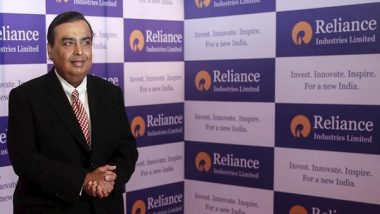 New Delhi, June 29: The Supreme Court on Wednesday stayed the Tripura High Court orders that had sought from the Centre the details of threat perception based on which security cover was provided to Reliance Industries chairman Mukesh Ambani and his family in Mumbai.

A bench of Justices Surya Kant and JB Pardiwala also issued notice on the Centre's plea challenging the orders of the High Court seeking security details of the Ambani family. Mukesh Ambani Resigns From Reliance Jio Board, Son Akash Ambani Made New Chairman.

Solicitor General of India Tushar Mehta, appearing for the Centre, told a bench that High Court had sought details of threat perception based on which security cover was provided to the Ambanis in Mumbai.

The Solicitor General said that the security provided to the family in Mumbai has nothing to do with the Tripura government and that High Court had no jurisdiction to entertain the PIL.

Earlier on Monday, he mentioned the matter for urgent hearing saying the High Court has summoned Union Home ministry officials to be present before it on June 28 with documents relating to threat perception.

The Central Government filed the appeal against the High Court's order asking the government to place the original file maintained by the Ministry of Home Affairs (MHA) regarding the threat perception and assessment report of the Ambani family prepared by it.

The appeal in the apex court said, "The PIL is filed by an individual person who had no locus in the matter and was just a meddlesome interloper, claiming himself to be a social activist and student by profession."

"The petition is a misconceived, frivolous and motivated public interest litigation petition, where no violation of any fundamental right was even pleaded, the High Court has sought to exercise its judicial review jurisdiction over a decision which has been taken by trained experts on public order, individual and national security," the government in its plea stated.

The High Court has failed to appreciate that the family members were neither residents of Tripura nor any part of the cause of action remotely arising from Tripura existed. Therefore, the High Court had no territorial jurisdiction nor subject matter jurisdiction over the matter, it further stated.