Get latest articles and stories on India at LatestLY. Telangana Rashtra Samithi (TRS) is likely to boycott the remaining winter session of the Parliament starting today over several issues including paddy procurement in the state and the suspension of Opposition MPs. 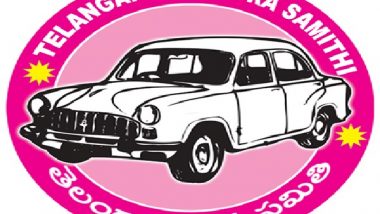 New Delhi [India], December 7 (ANI): Telangana Rashtra Samithi (TRS) is likely to boycott the remaining winter session of the Parliament starting today over several issues including paddy procurement in the state and the suspension of Opposition MPs.

"TRS will boycott the whole session from today. They will stage a brief protest at the Mahatma Gandhi statue in the Parliament premises and will formally announce their decision. The party will be boycotting the session over the issues of paddy procurement in Telangana, suspension of 12 Opposition MPs from Rajya Sabha and other issues pertaining to the state," sources close to the developments told ANI.

A total of 12 MPs from the Opposition parties were suspended from Parliament's winter session for allegedly creating ruckus on the last day of the monsoon session. The suspended MPs include six from Congress, two each from TMC and Shiv Sena and one each from CPM and CPI.

Meanwhile, TRS MP K Keshava Rao on Tuesday moved an adjournment motion in the Rajya Sabha over "discriminatory crop procurement policy of the Central government and non-procurement of crops from Telangana."

The adjournment motion was moved under rule 267.

In his letter to Rajya Sabha Chairman, Rao said, "I desire to move the following Adjournment Motion, under Rule 267 (suspension of Rules) to discuss the grave situation arising in Telangana where lakhs of tons of paddy is rotting on the yard due to the non-lifiting of the grains by FCI, discriminatory crop procurement policy of Central Government and non-procurement of crops from state of Telangana; and the ambiguous reply of the two Ministers in the Union cabinet."

The winter session of the Parliament commenced on November 29 and is scheduled to conclude on December 23. (ANI)