He was arrested from Ujjain in Madhya Pradesh earlier today. 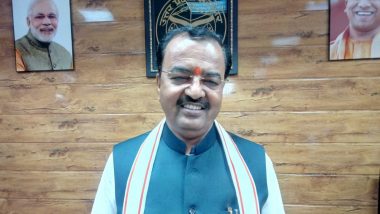 Lucknow, July 9: Uttar Pradesh Deputy Chief Minister Keshav Prasad Maurya on Thursday lauded efforts of Uttar Pradesh police after the arrest of Kanpur encounter main accused Vikas Dubey adding that history-sheeter will be handed the strictest punishment as per law. He also thanked the Madhya Pradesh police and the government for arresting the criminal.

While speaking to ANI, Deputy Chief Minister said that Dubey who carried a Rs 5 lakh bounty on his head had run away to Haryana and Madhya Pradesh because of the fear from Uttar Pradesh police. He was arrested from Ujjain in Madhya Pradesh earlier today. Vikas Dubey Arrested: From Kanpur Shootout to Gangster's Ujjain Temple Visit, Timeline of The Case.

"He will be given the strictest of punishment as per law. A strong message will be sent so that such an act is not repeated in Uttar Pradesh again. I want to congratulate UP Police and thank the Madhya Pradesh government and police," he added.

Hours after arresting Dubey, the gangster accused in killing eight policemen in Kanpur, Ujjain police handed him over to the Uttar Pradesh Special Task Force (STF) who took his custody and left for Uttar Pradesh with him on Thursday.

The Kanpur encounter main accused and his men had ambushed and opened fire on a police team which came to arrest him last week and eight policemen, including circle officer Devendra Mishra, were killed in the incident.