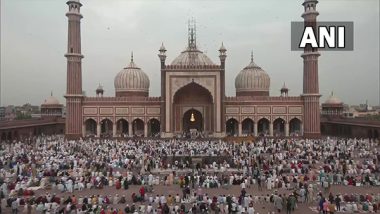 Reportedly, a notice has been placed at the entrance of Jama Masjid, Delhi which states, "Jama Masjid me Ladki ya Ladkiyon ka akele dakhla mana hai". The board prohibits the entry of women and girls into the Masjid who are not with male companions, said a press release on Thursday. Delhi's Jama Masjid Bans Solitary, Group Entry of Women and Girls, Place Three Plaques of 'Diktat' Outside Mosque.

The Delhi Commission of Women recommended withdrawing the ban. The commission asked to submit reasons for prohibiting the entry of women and girls without male companions in Jama Masjid by November 28, 2022, added the statement. DCW Chief Swati Maliwal Issues Notice to Shahi Imam of Jama Masjid After Mosque Bans Entry of Women.

The Jama Masjid in Delhi is a historical mosque and women have been going there for performing religious practices without any restriction for ages. Preventing women from freely entering and practicing their religion in the mosque is highly discriminatory and an extremely regressive practice as a place of worship should be open to everyone, regardless of their gender, said the DCW.

"Such an order is clearly misogynistic and against the ethos of the Constitution of India", stated the press release. The commission asked to furnish the following information till November 28, 2022: Reasons for prohibiting the entry of women and girls 'without male companions' in Jama Masjid; Details of the person responsible for restricting the entry of women and girls.

If the decision was taken in a meeting, please provide a copy of the minutes of the meeting; Steps taken by the authorities now for removing the restriction imposed on the entry of women and girls; Detailed action is taken report on the matter.

Earlier on Thursday, Jama Masjid said that it will no longer allow women to enter the mosque without being accompanied by men.