The use of entire oxygen towards medical use has hit the production of laser cutting industries here, leading to job loss, according to unit owners. There are oxygen-dependent metal cutting companies who have shifted their jobs on compressors as an alternative but the produce is not of required quality, they said. 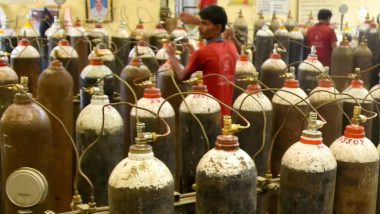 Aurangabad, May 10: The use of entire oxygen towards medical use has hit the production of laser cutting industries here, leading to job loss, according to unit owners. There are oxygen-dependent metal cutting companies who have shifted their jobs on compressors as an alternative but the produce is not of required quality, they said.

"The situation is crucial, just wait and watch is what we can do now," an official of an industrial association told PTI on Monday. The laser cutting companies require oxygen as their component. The government has diverted the entire oxygen production for medical use in the state. Maharashtra: Death of 5 Patients at Hospital in Thane Not Due to Oxygen Supply Issue, Says Committee.

This has brought limitation to the work of this industry leading to curtailment of manpower also, industry owners told PTI. Pratik Patil who owns a unit of laser cutting in Waluj industrial area said that the units are working for 12 hours and the oxygen facility can run only for eight hours. Earlier, the units were running the oxygen-based laser-cutting facility for round the clock.

"I am manufacturing medical equipment. Earlier we had 75 workers with us and today we have only 32. No other gas can replace oxygen. We tried to do cutting with other gases but that led to rejection of orders from our vendors who export their parts.

"For medical equipment manufacturing, earlier I used to get 14 cylinders in a day. But now we can hardly get 2-4 cylinders in ten days with due permission of FDA. As a step to control the probable damage hence forth, we have started to install our oxygen production unit," Pratik said.

"This will be of 450 cubic meter capacity and our need is around 150. If the government demands, we will be able to serve people too," he added. Another unit owner from Wadgaon Kolhati village, Dushyant Athawale, who won District Industry award of the Maharashtra government for 2018, expressed fear of loss of business due to non-availability of industrial oxygen.

"I have three cutting machines of which two are not in operation. I had a manpower of 30 earlier, now I am working with six persons only," Dushyant Athawale claimed. "We used oxygen at a pressure of 6-8 bar earlier and could cut thick sheets. Now we are using high pressure air cutting at 18-22 bar pressure but still we can't cut thick metal sheets.

The fear is, if our vendor finds an alternative for us now, it will be a permanent loss of business, which is also a loss of our region, he added. When contacted President of Marathwada Association for Small Scale Industries and Agriculture (MASSIA) Abhay Hanchnal, he said that the situation is critical even for industry.

He said, oxygen supply has hampered the production and the cost of production has also gone up. "Wait and watch is our policy now. I think that the government policies for expanding oxygen facilities will balance the supply of oxygen for medical as well as industrial use.

"We have permitted the use of oxygen to companies producing medical equipment to a limited scope," a senior official from Food and drug administration told PTI.