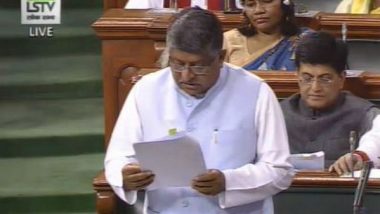 New Delhi, December 10: The Lok Sabha on Tuesday unanimously passed the Bill to extend the reservation for SCs and STs in the Lower House and the State assemblies by ten years with Union Law Minister Ravi Shankar Prasad stating that the BJP was fully committed to reservation for these sections and it will never be removed. The Constitution (One Hundred and Twenty-Sixth Amendment) Bill, 2019, was passed with a division with 352 members voting in its favour and none against it.

Noting that the BJP government was committed to the welfare of Scheduled Castes and Scheduled Tribes, Prasad said that there was no need of creamy layer in the reservation for these two communities. The minister also referred to reservation for the Scheduled Castes and the Scheduled Tribes in jobs and educational institutions and said quotas will stay. Exclusion of SC/STs From 'Creamy Layer': Modi Government Seeks Review of Supreme Court's 2018 Judgment.

"The BJP is fully committed to reservation for SCs and STs. It will remain and will never be removed," Prasad said. With several opposition members expressing concern over the Bill not having provision for extending the reservation for Anglo-Indians, the minister said the government will take a call on the issue.

He said the Congress had "obliterated" provisions for them in the Postal Department and Railways and was now attacking the government. The minister said that according to the 2011 Census, there were 296 members of the Anglo-Indian community. He said the opposition members had expressed concern about the Anglo-Indian community but the Bill pertains to extending reservation to 30 crore SCs an STs and there should be "effective concern."

He took a dig at opposition members for questioning census figures for the Anglo-Indian community, saying they had no problem with other figures. "The Registrar General of India is a responsible institution," he said. Prasad said while the population of Anglo-Indians had gone down, that of Christians had gone up from about 80 lakh in 1951 to about two crores.

Noting that the government respects the contribution of Anglo-Indians, the minister dismissed opposition charges that the Bill had ambiguities. "The Bill is unambiguous. We are discussing it. A call will have to be taken. Let us leave it there," he said. There has been a provision of the nomination of two members from the Anglo-Indian community in the Lok Sabha and of legislatures of some states.Prasad said the population of the community was in single digit in some states.

"I want to make it clear from the Prime Minister's and the government's side. SCs and STs as a group are extremely deprived. They have to be taken as a group together," he said. Prasad took several digs at the Congress during his speech and also attacked the Nehru-Gandhi family for the delay in the conferment of Bharat Ratna on Sardar Vallabhbhai Patel.

He said that BR Ambedkar was made the chairman of Constitution's drafting committee not because he was a Dalit but because he had the best knowledge of the Constitution. Prasad said the Congress did not honour him with the Bharat Ratna and it was given by VP Singh government which the BJP supported from outside.

Prasad said that the Modi government had also made a competent person from the Dalit community the President of the country. Responding to opposition concerns that the Bill had been brought without consultations with the states, he said that it will go to the states for ratification after the passage.

Prasad said he has been writing to the Chief Justices of high courts that names from among Dalits, minorities and other weaker sections should also come forward for appointment as judges. He said talks were also being held on All India Judicial Service.

"We will give reservation to SCs and STs in that," he said. Referring to the concern about crimes against Dalit girls, he said such incidents against any girl was a matter of concern. The minister said that a letter has been prepared to be sent to the chief ministers that investigation in the POCSO cases should be completed in two months.

Prasad said he will be writing to the Chief Justices of high courts so that trail in such cases is completed in six months through fast track courts. He said the Modi government was committed to the welfare of SCs and STs and the people had voted it back to power with the bigger mandate as it translates its promises of action on the ground. He said 50 per cent of Mudra loans and Ujjawala connections have gone to SCs and STs.

Prasad lauded the Dalit Indian Chamber of Commerce and said it was promoting entrepreneurship. Referring to concerns over the backlog of vacancies for weaker sections, he said efforts were being made to fill them. On-demand for reservation in private sector jobs, the minister said the government has been sensitising the private sector.

Noting the Congress had been able to increase its tally by only eight seats to 52 in this Lok Sabha election from 44 earlier, he said the party should wait for the future and the wait "is long". Prime Minister Narendra Modi was in the House during voting on the Constitution Amendment Bill. It was passed by a majority of the total membership of the House and by a majority of not less than two-thirds of the members present and voting.