He, however, forewarned that the global situation remains far from satisfactory and informed about speculations of a possible second wave of the spread of the virus in some countries. 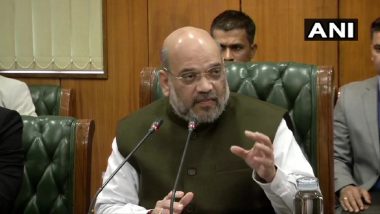 Prime Minister Narendra Modi and Home Minister Shah on Thursday interacted with the Chief Ministers of States via video conferencing and discussed ways and means to combat the menace of COVID-19. "Union Health Secretary apprised the dignitaries of the rise in a number of cases in India, the spread of cases from Nizamuddin Markaz, preparations to tackle medical cases arising out of the further spread of the virus and need to break transmission chain in the districts with a high number of confirmed cases," the press release said. Fact Check: Amit Shah Tested Positive For Coronavirus? Here's The Truth Behind The Fake News Image Going Viral.

Prime Minister Modi outlined that the common goal for the country is to ensure minimum loss of life. "For the next few weeks, testing, tracing, isolation and quarantine should remain the areas of focus," he said while highlighting the necessity of maintaining the supply of essential medical products, availability of raw material for the manufacture of medicines and medical equipment.