Disney has announced that Scarlett Johansson-starrer Black Widow and Cruella, featuring Oscar winner Emma Stone, will be having a simultaneous release in the theatres and on streaming service Disney Plus. 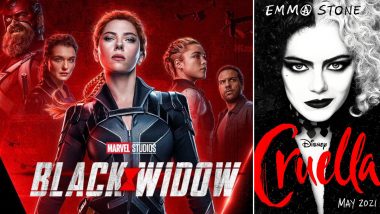 Disney has announced that Scarlett Johansson-starrer Black Widow and Cruella, featuring Oscar winner Emma Stone, will be having a simultaneous release in the theatres and on streaming service Disney Plus. The studio's decision puts an end to a year-long uncertainty over the company's two marquee projects that were originally set to debut in theatres but were postponed due to the coronavirus pandemic. Black Widow: Scarlett Johansson’s Movie Gets Postponed To July 9, To Simultaneously Release On Disney Plus

Johansson's Black Widow, the long-awaited solo film about Marvel Cinematic Universe (MCU) superhero Natasha Romanoff, has been pushed back by two months and will now debut on July 9 instead of May 7. The Cate Shortland-directed film has been delayed three times since the pandemic started last year. It was originally scheduled to release in theatres on May 20, 2020. Secret Invasion: Kingsley Ben-Adir Lands a Role of a Baddie in Upcoming Marvel Series on Disney+.

Cruella, the prequel to 101 Dalmatians that serves as an origin story for iconic villain, is arriving as scheduled on May 28. Meanwhile, Pixar film "Luca" will skip theatres entirely and debut exclusively on Disney Plus on June 18. "Today's announcement reflects our focus on providing consumer choice and serving the evolving preferences of audiences.

"By leveraging a flexible distribution strategy in a dynamic marketplace that is beginning to recover from the global pandemic, we will continue to employ the best options to deliver The Walt Disney Company's unparalleled storytelling to fans and families around the world," Kareem Daniel, Chairman, Disney Media & Entertainment Distribution, said in a statement.

The studio's move towards streaming service comes as a blow to the exhibition sector in the US with theatres slowly and steadily starting to reopen across the country, including major markets like Los Angeles and New York City. But Disney doesn't plan to entirely ditch theatres as it announced that its other titles, that mostly belongs to 20th Century Studios, will solely debut on the big screen.

From Marvel Studios, "Shang Chi and the Legend of the Ten Rings" has been delayed by two months to September 3. The film, which boasts of a star-studded cast of Simu Liu, Awkwafina, Tony Leung, Florian Munteanu and Michelle Yeoh, was previously set for release on July 9, 2021, the date now occupied by "Black Widow".