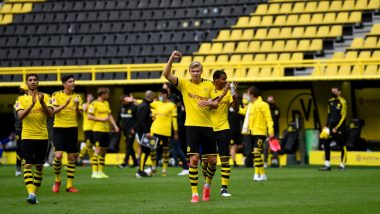 Videos published on social media following the 4-0 win over Schalke on Saturday showed players celebrating together as the bus passed a crowd of Dortmund fans cheering on the street. The club estimated the bus was greeted by 150 to 200 fans near the Dortmund training center when the team returned from the game. Cristiano Ronaldo Surpasses Romelu Lukaku to Become the Highest Goal-Scorer in Serie A 2021 After A Brace Against Crotone, Check Out List of Records Shattered by CR7.

The league said on Monday that Dortmund was fined because "players celebrated the win in the derby in the team bus without distancing and without covering the mouth and nose."

Dortmund said it accepted the fine. The club apologized on Sunday for the celebrations, saying it would speak "with the police and with everyone involved" about how best to prevent similar scenes in the future.

Dortmund and Schalke have a longstanding rivalry. The win for Dortmund also marked a turnaround after one win from its previous six league games. Dortmund is sixth in the Bundesliga.