This was for the very first time since the 1966 World Cup final that an English side defeated Germany in the knockout match of a major tournament. 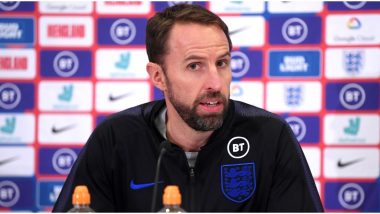 London, June 30: The tactical tweaks of England Football team head coach, Gareth Southgate were one of the reasons for the nation's historic win over Germany in the ongoing Euro 2020 as the manager admitted he would have been "dead" if he had got it wrong.

England took down Germany 2-0 on Tuesday with Raheem Sterling and Harry Kane each scoring in the second half to seal a spot in the quarter-finals. This was for the very first time since the 1966 World Cup final that an English side defeated Germany in the knockout match of a major tournament.

"You know you change the shape, you pick certain personnel in place of others and if it goes wrong you are dead," Goal.com quoted Southgate as a saying. "We had to go about it in the way we believed. We wanted aggressive pressure all over the field and we felt that to match them up was the right way of doing that. Copa America 2021 Quarter-finals Schedule: Who Plays Who in Last Eight?.

"We felt that speed in behind Harry would cause them problems. I thought that Bukayo [Saka] and Raheem really created that jeopardy behind their backline right from the start. We also defended brilliantly and our goalkeeper was immense. It was a tremendous performance."

Notably, Southgate stuck with a four-at-the-back system to guide England through their three group stage games but on Tuesday's match, he opted to use a 3-4-3 system against Germany which did eventually lead Three Lions to victory over their rivals.

Earlier in the match, Sterling scored a 75th-minute goal to give England the lead. With that goal, Sterling has now scored 15 goals in his last 20 matches for England. Harry Kane then doubled England's advantage in the dying minutes as he equalled Wayne Rooney's record of seven goals scored at major tournaments for England.

Southgate's men are now all focused on their Quarter Final clash against Ukraine who defeated Sweden later in the night by 2-1 after an enthralling extra-time.

"We played extremely well, I think we deserved the win but I have had to say to them straight away. Look, I am the party pooper, because if we do not capitalise on Saturday now then it does not count for anything," Gareth pointed.